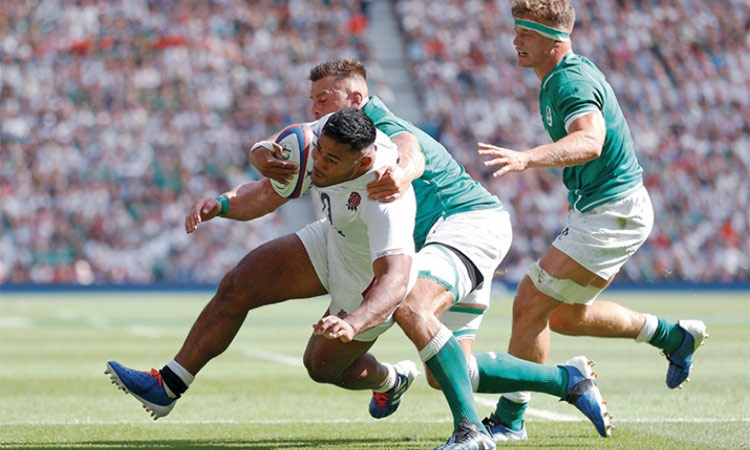 England’s Manu Tuilagi scores their third try against Ireland during their World Cup warm-up match in London on Saturday. Reuters

Joe Cokanasiga scored twice as England laid down a warning to their Rugby World Cup rivals with an astonishing 57-15 trouncing of Ireland at Twickenham on Saturday.

England ran in eight tries in all -- man of the match Manu Tuilagi getting one of them -- as they recorded both their highest score and largest winning margin over their opponents.

For Ireland, who won the Six Nations Grand Slam and beat New Zealand last year, it was a bitter reality check in a game they had hopes of becoming world number one.

England skipper Owen Farrell laid down a marker for his side to improve even further after the record victory.

Both sides came roaring out of the blocks in the baking heat with Farrell landing the first blow with a penalty in the seventh minute.

The visitors struck back as Rob Kearney’s superb long pass found Jacob Stockdale as the Ulster winger touched down for his fifth Test try.

Ross Byrne, making his maiden start at fly-half, converted from wide out on the left for 7-3.

Jordan Larmour was left grasping at air as he tried to tackle Cokanasiga, who brushed him aside to touch down in the 13th minute -- Tuilagi’s decoy run having sucked in the Irish defence. Farrell failed to convert but England had their noses in front at 8-7. Byrne slotted over an excellent penalty to give the Irish a 10-8 lead.

Tuilagi once again caused panic in the Irish defence and Stockdale repeated an error from the first try in coming on off his wing and Tom Curry fed Elliot Daly who ran in to touch down.

Tuilagi did not bother setting anyone up for the third try going on his own paying little notice to Stockdale’s effort at a tackle as Farrell added the extras.

The Irish began the second-half also without injured Conor Murray.

Five minutes after the break, Ireland lost a line-out and ended with Maro Itoje bursting through the middle, to score under the posts.

Tuilagi caused more havoc in the Irish defence setting up George Kruis to go over for a try which Farrell converted for 36-10.

The hosts crossed the 50-point mark with a quarter of an hour to play.

Flanker Curry crossed before Cokanasiga added his second after 66 minutes with Farrell adding the two points.

Bundee Aki had a rough day defending Tuilagi but once the latter had gone off he gained a little consolation in breaking through from outside the 22, fending off Daly to touch down.