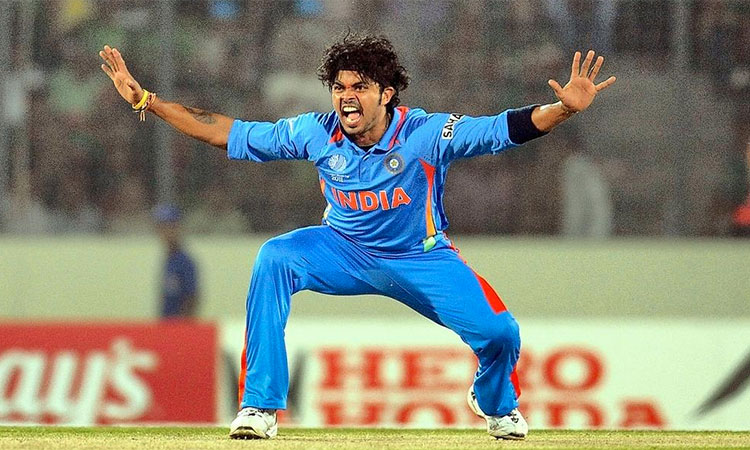 Kochi: Indian fast bowler Shanthakumaran Sreesanth’s ban for alleged spot-fixing has been reduced to seven years, with the sanction period coming to an end on Sept.12, 2020, the Board of Control for Cricket in India (BCCI) has said.

The decision comes after the Supreme Court of India set aside the life ban imposed on Sreesanth by the BCCI and asked the board to reconsider the length of any fresh ban.

After the decision to reduce the ban imposed on him to seven years, an elated Sreesanth has said he will aim to pick 100 Test wickets if he gets a chance to represent the national side again.

The Supreme Court had asked the Board of Control for Cricket in India (BCCI) Ombudsman Justice (retd) DK Jain to decide on the quantum of punishment for the cricketer for his alleged involvement in the spot-fixing scandal that rocked the 2013 edition of the Indian Premier League.

And on Tuesday, Jain decided that Sreesanth’s ban will end on Sept.12, 2020 -- seven years as compared to the original life ban imposed on him by the BCCI.

“I am extremely delighted with what I have heard now. Thanks to each one of my well-wishers who prayed for me and the prayers have been answered. I am 36 now and next year I will be 37. I have 87 Test wickets and my aim is I want to finish my career with 100 Test wickets. I am confident that I can return to the Indian Test team and always wanted to play under Virat Kohli,” Sreesanth told the media.

The Ombudsman observed in his Aug.7 order: “Sreesanth is already facing a ban, for almost a period of six years now, which bars him from playing cricket or participating in any event, with which the BCCI is, directly or indirectly, associated.

“Even otherwise, for Mr Sreesanth, who is now in his late thirties, his prime years as a cricketer, particularly as a fast bowler may already be over.

“Bearing in mind, all these factors, I am of the view that banning Sreesanth from participating in any kind of commercial cricket or from associating with any activities of the BCCI or its affiliates, for a period of seven years with effect from Sept.13, 2013, i.e. the date from which the period of ban imposed by the Disciplinary Committee had commenced, will meet the ends of justice.”

The BCCI had banned Sreesanth for life for his alleged involvement in the spot-fixing scandal that rocked the 2013 Indian Premier League.

On March 15, the Supreme Court had quashed the BCCI disciplinary committee’s order that imposed a life ban on Sreesanth and directed the committee to take action.

At this, the BCCI had told the court that since its disciplinary committee, which had dealt with Sreesanth’s matter, was not operational any more, the matter should be decided by the ombudsman appointed by the Supreme Court.

In April, the apex court had given the ombudsman three months to decide on the quantum of punishment.

It had also said that its decision shall not have a bearing on the criminal proceedings pending against Sreesanth in the Delhi High Court.

The Delhi Police had moved the High Court against a trial court order which discharged all the accused, including Sreesanth, in the IPL spot-fixing scandal.

Sreesanth moved the Supreme Court against the order.