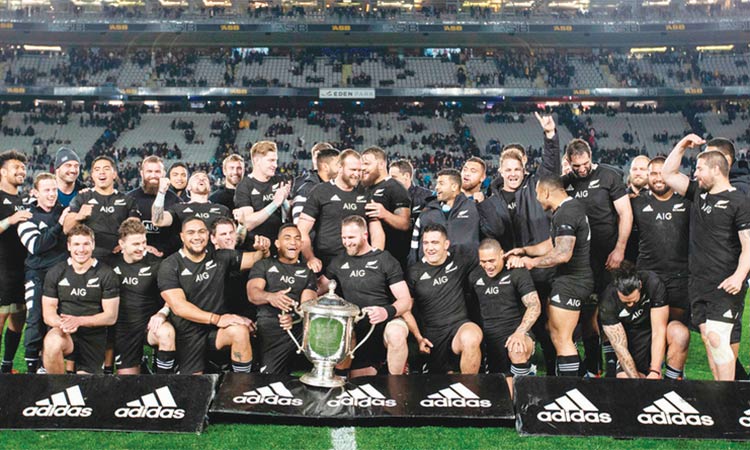 The All Blacks sent out an emphatic message they are not to be underestimated at the World Cup as they bounced back from last week’s hiding to thrash the Wallabies 36-0 in Auckland on Saturday.

Having been mocked in the media sparring before the Test as the “Old Blacks” and “over the hill”, the All Blacks dug deep into their wealth of experience to outscore the Wallabies five tries to nil.

It is the first time since 2012 and the eighth time overall that Australia have failed to score in a Test against New Zealand.

The overwhelming victory, just seven days after suffering a record loss to the Australians, saw the All Blacks retain the Bledisloe Cup for a 17th straight year.

It also meant the Wallabies, who arrived confident they could end years of misery at the All Blacks’ Eden Park fortress, go home still winless in Auckland in 19 Tests stretching back to 1986.

A week after the Wallabies bullied the All Blacks up front and around the fringes, this time it was the New Zealand tight five who had control and the loose trio of Kieran Read, Ardie Savea and Sam Cane commanded the breakdown.

The All Blacks may be notoriously slow starters but they opened up this time bristling with determination and had an immediate injection of confidence when Christian Lealiifano’s kick-off went out on the full.

Within minutes they had pushed the Wallabies deep into their own territory where Richie Mo’unga opened the scoring with a penalty.

The Wallabies had their moments midway through the half with Samu Kerevi and Marika Koroibete finding space that had the All Blacks scrambling.  But a sustained period of drives at the line were repulsed by a watertight All Blacks defence, while penalty attempts by Reece Hodge and Lealiifano went wide.

The All Blacks took control with a 60-metre try to Mo’unga from an intercept pass, and then Bridge, making the most of his first Test start with a series of raids down the left wing, put Aaron Smith in for a try.

All Blacks skipper Kieran Read’s plea for better discipline from his troops was largely successful, although there will be concerns over Dane Coles’ sinbinning just before half-time for a dangerous clear-out. But despite his absence, a seven-man All Blacks pack marched the Wallabies eight backwards in two scrums.

As soon as Coles returned to the fray, five minutes into the second half, Sonny Bill Williams crashed through two tackles to score by the posts and extend the lead to 24-0.

Reece, who had a quiet first half, fired up in the second when play swung his way and was rewarded with a try when he toed the ball passed Hodge and then outsprinted Kurtley Beale to score.

Bridge slid in for a try in the corner just before full-time to round off a one-sided victory.

All Blacks coach Hansen refused to get carried away by the comprehensive thrashing of the Wallabies, saying he was “proud” of his side but that discipline remained an issue.

Meanwhile, Wallabies coach Michael Cheika insisted Saturday’s thrashing at the hands of the All Blacks had not derailed Australia’s World Cup preparations as he drew up a list of errors to be addressed.

“As terribly disappointed as I am, you have to suck it up and get ready for the next one,” he said.

“I’m not worried. You get punched in the face sometimes, you get hit hard and it’s about how you get back up.

Meanwhile, Argentina was denied just a second victory over the Springboks in South Africa when Lucas Mensa’s try with three minutes to go was disallowed in their rugby Test on Saturday.

Jantjies scored 14 points off the kicking tee to go with a brace of tries by wing S’busiso Nkosi, keeping the Springboks unbeaten this season.

Argentina appeared to be struggling in the first half but an intercept try by lock Guido Petti right on halftime gave the Pumas hope.

Captain Pablo Matera scored in the second half to make it 18-18 before Jantjies kicked two late penalties.