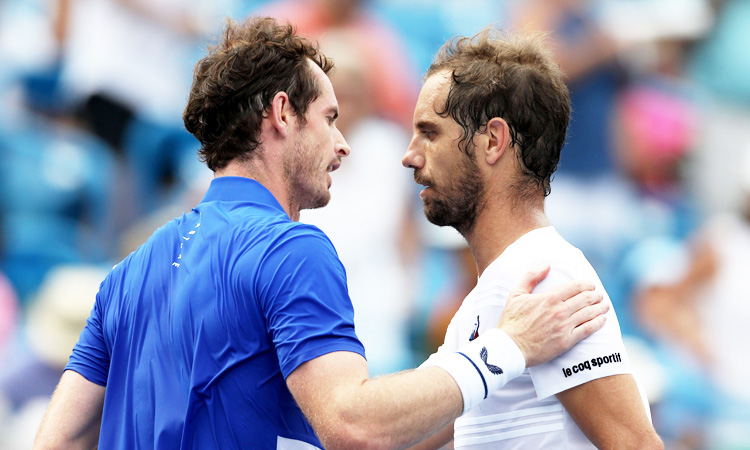 Three-time Grand Slam champion Andy Murray said he “did OK” in his first singles match in seven months — a 6-4, 6-4 loss to Richard Gasquet at the Cincinnati Masters on Monday.

“I don’t really know what I was expecting, to be honest,” said Murray, sidelined since January by a career-threatening hip injury. “I did OK.

“There were a lot of things I would like to have done better in the match, but you also have to be somewhat realistic in terms of what you can expect, in terms of how you actually play and hit the ball.”

Murray said he “felt fine, physically,” during the match.

“My legs were a little bit heavy at the end of the match. When Richard drop-shotted me, there were a few times I didn’t even run to the ball, didn’t react to it.

“That’s nothing to do with my hip, that’s just me not running for a ball.”

Murray hadn’t played a singles match since a five-set first-round exit at the Australian Open, where he tearfully acknowledged he feared his career was over.

Since undergoing right hip resurfacing surgery on Jan.28 he has slowly fashioned a return.

Murray has been playing doubles for the past two months, winning at Queen’s Club in London with Feliciano Lopez.

Gasquet, who had groin surgery in January, ended a five-match skid against the Briton, now ranked 324th.

Murray opened the game with a double fault, and his forehand into the net gave Gasquet a match point that the 56th-ranked Frenchman converted when Murray sent a service return wide to end the match after 96 minutes.

Tentative at times, he finished with a respectable 20 winners but struck 28 unforced errors.

No US Open singles

He was optimistic he can improve further.

“I think with a few more weeks of practice and hopefully some more matches, then I could do better,” said Murray, who nevertheless said after the match that he did not intend to play singles at the US Open.

“I’m not going to play the US Open singles,” he confirmed, adding that US Open organizers had wanted to know by Monday if he was interested in a wild card invitation.

“I felt like I wanted to maybe try and get a couple of matches in before making a decision like that,” added Murray, who knows the best-of-five set format at Grand Slams will be even more of a challenge.

The return of former world number one Murray dominated an opening day that saw another former US Open champion, Marin Cilic, join Murray on the sidelines.

Seven-time champion Roger Federer will start his campaign in the second round against Argentine Juan Ignacio Londero, who defeated Italy’s Matteo Berrettini 7-6 (7/3), 6-3.

In the women’s draw at the ATP-WTA event, Venus Williams reached the second round with a 7-5, 6-2 victory over American compatriot Lauren Davis.

“I didn’t really think about that, I was just trying to win today,” Williams said. “I’ll try to win tomorrow and the day after.”