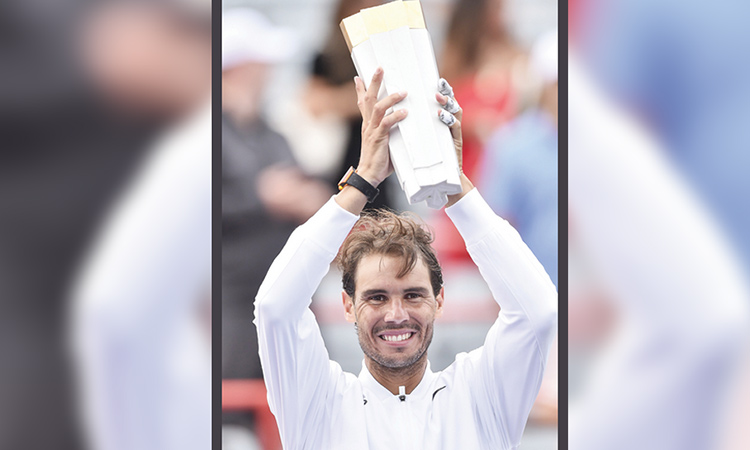 Rafael Nadal poses with the trophy in Montreal on Sunday. Agence France-Presse

Rafael Nadal completed a 6-3, 6-0 demolition of Russian Daniil Medvedev to win in Montreal on Sunday and extend his record haul of Masters 1000 titles.

The world number two secured his 35th Masters crown, pulling clear by two in that category from Novak Djokovic, who has won 33 of the elite tournaments.

Claycourt king Nadal successfully defended a hard court title for the first time in his career.

Nadal, in contrast, had played just three hard court matches since starting his build up to the US Open this week -- reaching the final on a walkover when injured Gael Monfils pulled out of their scheduled semi-final.

With all that going for him, Nadal needed just 70 minutes to subdue Medvedev, breaking the Russian four times.

Hours later Nadal said he would skip the Cincinnati Masters starting, where he was seeded second behind Djokovic and ahead of Roger Federer.

The top seed, who now owns five Canadian title dating to 2005, swept the last seven games in the hardcourt blowout against his 23-year-old Russian opponent -- who had never played Nadal before.

Despite the lopsided defeat, Medvedev was pleased with his time in Toronto.

For Nadal it was a third title of 2019, after clay court success at Rome and the French Open.

Nadal’s win in Montreal marked a significant step for the Spaniard as he prepares for the US Open but it wasn’t enough to topple Djokovic at the top of the ATP rankings, released on Monday.

Stefanos Tsitsipas, who entered the top five for the first time last week, drops two places and is leapfrogged by Kei Nishikori and Alexander Zverev.

Medvedev’s reward for his appearance in Sunday’s final was a one-place climb to eight.

US and Australian Open champion Naomi Osaka returned to the world number one spot in the WTA rankings.

The 21-year-old lost to Serena Williams in the quarter-finals of last week’s Rogers Cup but benefitted from the second round defeat of former number one Ashleigh Barty and the failure of Karolina Pliskova to reach the semis in Toronto.

Osaka first hit top spot in January, after winning back-to-back majors in New York and Melbourne, making history as the first Japanese player to achieve it. After seven weeks on top, Barty slips to second with Pliskova in third.

Meanwhile, John Isner blasted 27 aces in his first-round match against Serbian Dusan Lajovic on Sunday but it was a timely break of serve that saw the American advance 7-6(3) 1-6 7-5 at the Cincinnati Open.

Lajovic shook off the loss of a first set tiebreak to dominate the second frame, earning two breaks of Isner’s fearsome serve.

However, trailing 6-5 in the final set and serving to stay in the match, Lajovic’s own serve failed him at the worst possible time as Isner, a finalist here in 2013, sealed the win to reach the second round. Also on Sunday, Australian Alex De Minaur rallied from a set down to beat Italian Marco Cecchinato 6-7(5) 6-1 6-2.

“These wins are often the ones that count the most,” De Minaur, who did not drop a service game, told reporters. “To be able to come back from not playing my best tennis and turn it around, I’m really happy to get the win.”