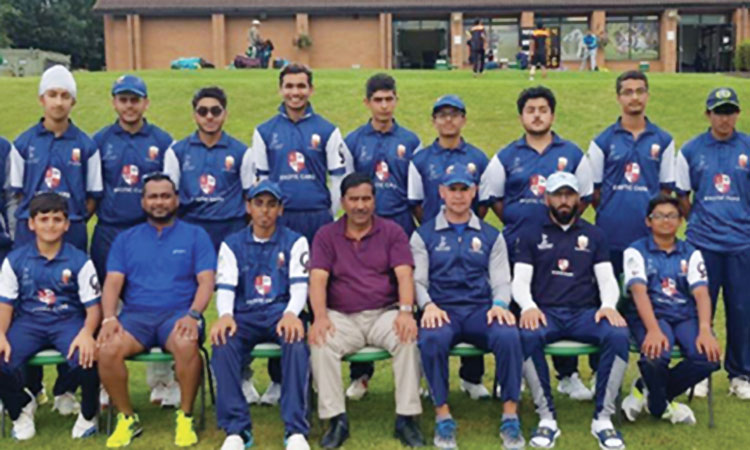 YTCA cricketers pose for a picture during their UK tour.

Agnelo Rodrigues, Special Correspondent
The 14-strong YTCA Kings UAE cricket squad returned home with a kit full of experiences from the just concluded UK Tour 2019. While most of the budding stars averred that it was a rich learning experience, others rued that they were not able to muster up more wins during the 10-day camp at Leicestershire, England.

Though the boys began on a strong note beating the Switzerland under-18 National Team in two T20 matches played at the Langston Cricket Club, and had a resounding eight-wicket victory against the Leicester County U-15 side in the T20 tie played at the Hinckley grounds, they were unable to keep the winning streak in the matches that followed later on the tour.

A 6-wicket loss to the Pakistan side, Lahore Grammar, and two consequent close defeats to an experience Hong Kong team did dampen the spirits of the UAE side, but all in all it was a great learning curve, said the cricketers. It honed their skills, which they say will hold them in good stead when they play in the UAE.

Sixteen year old Hamdan Tahir who shared the Best Batsman glory with his colleague Hamad Arshad said that playing against players from UK and Switzerland gave him a better insight into how he could up his game.

“It was a new experience to play at a senior level here, compared to my Malaysia tour in 2015. Though I wasn’t that consistent, the tour went really well for me. I scored two fifties over here and that was good. This will help me to play better cricket when I get back to UAE,” said the student of Gems Westminster school, Sharjah.

“It was completely different playing here. UAE has developed and there is a lot more cricket now, but as expected there is a lot of difference because of the pitches and the conditions. We faced a variety of players some local boys, some from Switzerland and others from Pakistan, and that helped me a lot,” added Hamdan who also plays for the Ajman team.

YTCA head coach Shahzad Altaf too was very impressed with Hamad’s performance. “It has been a good experience for the boys and some boys did really well like Ryan Flory and Mohsin Hasnain in the junior group. While in the senior it was Hamdan. He has a good future and the potential to play for UAE national side.”

The YTCA has been grooming talent for the last two decades and currently has four of their boys playing for the UAE national team - Darius D’Silva, Chiraj Suri, Ahmed Raza and Rameez Shahzad - which returned victorious from the recent The Netherlands tour. Hamad’s teammate left-arm Chinaman Hassan is upbeat after his first international tour.

“It’s a great experience, the pitches here are so different from the ones in Dubai. If I could say something, our team performance could have been better.

“We wanted to win all our matches obviously, but we couldn’t do that. I did get a couple of four-wicket spells,” said the 16-year-old who snared 13 wickets in eight innings. “I have picked up a lot of confidence because we have had good coaches guiding us. I am not a batsman but after this tour I may reconsider my thoughts because I have had some good bating figures too,” he added.

The tall Krish Sanklecha who returned with 3-15 on the very first day playing against the Swiss side also contended that the tour has added value to his bowling prowess.