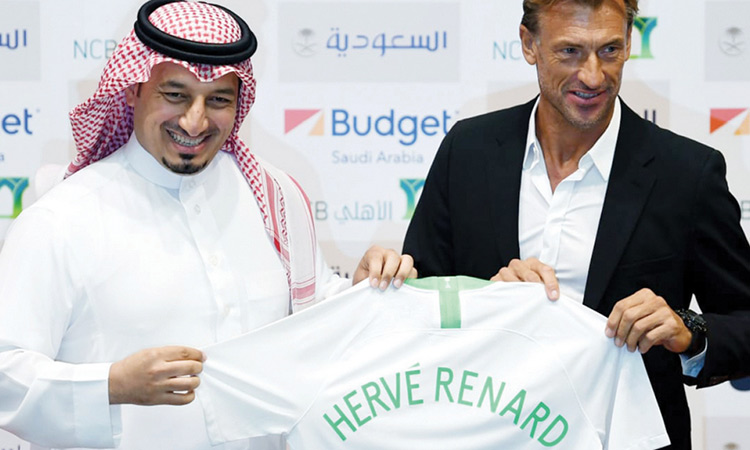 Newly appointed head coach Hervé Renard has declared that a sense of unity will be key if Saudi Arabia are to have a successful future. The Frenchman joined the Green Falcons ahead of their imminent FIFA World Cup Qatar 2022 and AFC Asian Cup China 2023 Asian Qualifiers campaign, which begins in early September.

Renard —  who became the first coach in history to win the Africa Cup of Nations title with two different nations when he led Zambia to glory in 2012 and succeeded again with Côte d’Ivoire three years later – was appointed following his resignation as Morocco national team head coach last month.

“Qualifying for the FIFA World Cup in 2022 is one of our main targets that we will work to achieve,” said the 50-year-old who guided Morocco to last year’s World Cup in Russia.

“We want to write history, but success will only happen if there is teamwork. Reaching the World Cup is a great experience, and I would like to repeat it again.

“However, we have to recognise that this thing will not be easy, and that we have to work together to achieve it.”

With Saudi Arabia’s Asian Qualifiers campaign set to begin against Yemen on Sept.10, Renard has revealed he will leave no stone unturned in order to achieve the success he wants – starting with this week’s AFC Champions League Round of 16 fixtures.

“I will be in Riyadh for Monday’s AFC Champions League match between Al Nassr and Al Wahda and will then return to Jeddah to attend Tuesday’s game between Al Ahli vs Al Hilal.

“These matches will give me and my technical staff a chance to assess the players who can best help me during my role with the national team.”

Saudi Has been drawn in the Group D along with Palestine.

Meanwhile, Palestine bid for a first WAFF Championship title is far from over, but head coach Noureddine Ould Ali has one eye on his side’s Asian Qualifiers campaign for the FIFA World Cup Qatar 2022 and AFC Asian Cup China 2023, which begins in September.

A 1-0 opening match win against Yemen in Group A was followed up by a late 2-1 defeat to hosts Iraq on Friday in a mixed start to the regional championship, giving the Palestinians little room for error if they are to advance to the final on Aug.14.

But even if Palestine’s WAFF Championship tilt ends at the group stage, Ould Ali sees the competition as important preparation for the crucial Asian Qualifiers to come.

“When we participate in WAFF Championship, we have two goals,” said the Algerian.

That match, against Uzbekistan on Sept.5, is the start of an eight-game campaign which will also pit them against Singapore and Saudi Arabia, as well as Yemen, who they defeated last Tuesday.

Palestine appeared on track for another win, this time against the hosts, when an Islam Batran penalty put them 1-0 up inside three minutes on Friday, but goals from Mohanad Abdulraheem and Hussein Ali sealed an impressive Iraqi recovery.

Despite the defeat, which significantly dents their chances of reaching the final as group winners, Ould Ali is buoyed by the experience thus far in Karbala.

“Although we lost, we will continue to work strongly in the coming matches as we still want to compete and also want to continue developing our performance,” he said.

“The positive thing in this match was we scored early, as we usually don’t score in the first minutes. On the other side, we still have some work to do in the offensive and defensive sides and also the players reaction after we conceded was not as we hoped.

“Playing in such weather in front of such a big crowd was good for us, because we will face Asian teams in different conditions.”