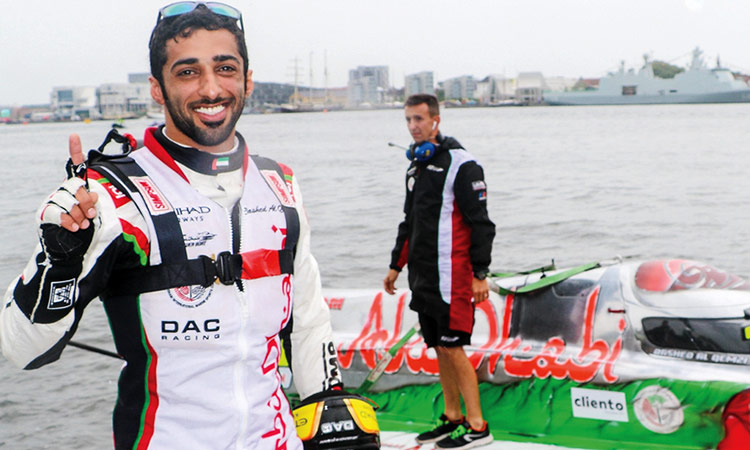 Rashed Al Qemzi said his opening round success in Lithuania has given his confidence to win the championship a boost.

Team Abu Dhabi’s Rashed Al Qemzi, back at the scene of his most significant victory yet in international powerboat racing, has a second UIM F2 World Championship crown firmly in his sights in Norway.

Qemzi, F2 champion in 2017, leads the 2019 series after his opening round win in Lithuania last month and has had only one target on his mind since arriving in Tonsberg for Sunday’s Grand Prix of Norway.

“I feel great to be back in Norway,” said the Emirati driver on Friday, ahead of the evening Speed Run and Match Race series.

“I have very good memories of winning here two years ago and how important that result was to help me take the championship.

“I’ve won the title once and want to win it again. I crashed out here last season but I’ve put that behind me. Winning in Lithuania has given me a lot of confidence and now I want to build on my lead in the championship.”

While Qemzi was making a flying start to the championship in Lithuania, Team Abu Dhabi’s other F2 challenger, Rashed Al Tayer, had a frustrating weekend, crashing in qualifying and then going out of the Grand Prix when his boat was rammed.

But being part of the Team Abu Dhabi crew who captured the World Endurance title earlier this month has given him a major boost. “I feel good, I feel positive,” said Tayer.

“I’ve forgotten about what happened in Kaunas. This is another race and it’s a new start for me in the championship and I’ll do everything I can to win.

“I finished third in Tonsberg last year when another boat ahead of me was disqualified and there were a lot of accidents. Hopefully we won’t have that this time.

“Being part of the team that won the world endurance championship has given me new confidence and belief that I can do a lot more this year. There’s a very good feeling throughout the team, and we’re all working hard together to achieve more success this season.”

The F2 boats assemble at 1.30pm on Saturday for a free practice session in Tonsberg ahead of a 5pm start to the three-stage qualifying session for Sunday’s Grand Prix of Norway getting under way at 4.30pm.

Qemzi, who was in sparkling form as he dominated qualifying in Lithuania, was nevertheless left at the start of the Grand Prix 24 hours later owing to a mechanical issue.

“I had a big problem at the start of the race with a loss of power, and that meant I dropped to third place,” he said.

“But the Team Abu Dhabi mechanics have been working hard since then to make sure we don’t have a repeat of that trouble.”

Meanwhile, one of the first to arrive in the pits among the 24 drivers was the Sharjah Team who hope to repeat their opening round performance and claim another podium place for their driver Ferdinand Zandbergen.

Team Manager Sami Selio said: “Third was a very good start to the season. At the moment we are not the fastest, so our realistic target is a top five finish.”

Last year’s Grand Prix in Tonsberg left the team with several issues to deal with including a damaged BaBa hull to fix along with some harsh criticism of Zandbergen’s driving.

However, Selio countered: “He’s not a reckless racer. Yes, he pushes but you have to do that in F2 if you want to succeed. Now he’s driving good and learning his race craft.

“You need to get 110 per cent out of the boat to be on pole position, right now he’s at 90 per cent and that’s a good place to be at the moment.”

At the start of the year Selio signed a multi-year collaboration with the Sharjah Sports Federation and they have big plans to develop the sport in the UAE.

One of them is to train local drivers to race F4 against other teams based in and around the Emirate and also to develop the 9 horsepower SJ10 class.

This type of mono-hull racing was created over thirty years ago by Selio’s father and has proved to be a true breeding ground for up-and-coming racers.