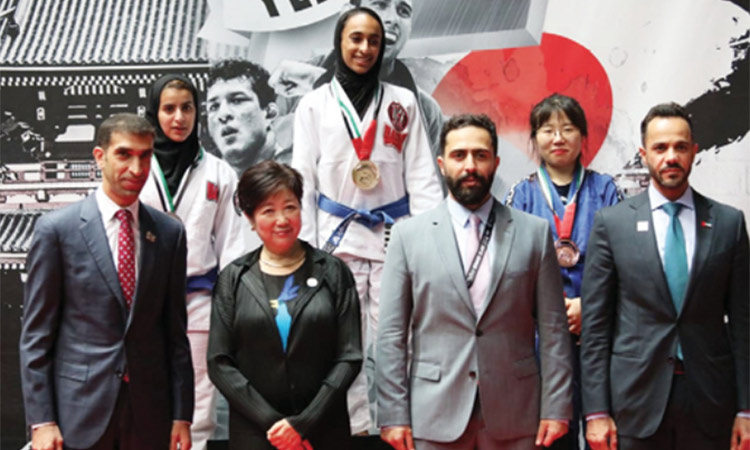 Winners pose with officials during the presentation ceremony held at the Ota Gymnastic Hall in Tokyo on Saturday. WAM

In a landmark victory, UAE Jiu-jitsu team harvested 56 coloured medals on day one of round two of the fifth Abu Dhabi Grand Slam Tokyo, held at the Ota Gymnastic Hall in Tokyo with competitors from more than 35 countries taking part.

Governor of Tokyo, Yuriko Koike, Dr. Thani bin Ahmed Al Zeyoudi, Minister of Climate Change and Environment, Khalid Omran Al Amri, UAE Ambassador to Japan, Mansour Al Dhaheri, member of the Board of Directors of the Emirates Jiu-Jitsu Federation and Head of the Emirati mission to the tournament, and Tarik Al Bahari, Director of the Abu Dhabi Grand Slam, were present at the event.

The Governor of Tokyo presented medals to the UAE male winners. She expressed her delight at attending the competition for the second time while noting the significant progress taking place since the last edition in 2017.

She added that the next generations in the UAE and Japan are fortunate to have such strong cooperation between the UAE and Japan in jiu-jitsu. No doubt, she said, their bonds will be stronger event after event and this will enable friendly relations to further prosper.

In another victory, the Wahda Club won the first place in the general ranking of clubs and academies with 2960 points, followed by Bani Yas Club at 2900 and Japan Axis Jiu-jitsu Academy at 2220 points.

Talented Emirati hero Khalid Al Braiki won the 85kg black belt gold medal after a long absence from the mat. He said he would return to compete in his favourite 77kg category in upcoming competitions.

‘’I prepared well for the competition. Concentration and extensive training led me to the gold, which means a lot to me and gave me a boost,’’ he said.

‘’I fought four rounds but the toughest one was against the Brazilian rival. I beat him in the last seconds. I am extremely happy with this gold medal, it has a special taste and one of my great life achievements.’’

American Isaac Doederlein ran away with the show and won the gold trophy in Abu Dhabi King of Mats Lightweight Bracket, ADKOM.

The American black belt hero also walked away with a cash prize of $10,000. He said he was determined to not allow anyone else to walk away with the first-place trophy in the Abu Dhabi King of Mats Lightweight Bracket. In five matches, Doederlein defeated not less than four opponents, including Brazil’s Gabriel Sousa in the big final. It was a performance for the books.

“It is all about hard work. I believe that to be the best you have to go through phases and build your game until you are able to put everything together. After years on the mats, I am now able to do just that and that is exactly what happened today,” Doederlein said after the final triumph.