Dressel sets pool on fire with golden hat-trick at worlds 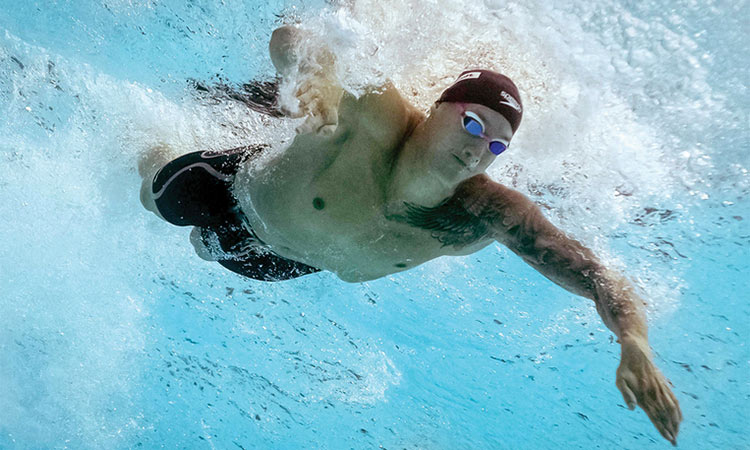 US’ Caeleb Dressel in action during the final of the men’s 100m butterfly event at the World Championships on Saturday. Agence France-Pressee

American superstar Caeleb Dressel produced more fireworks on Saturday as he romped to a hat-trick of gold medals, taking his tally to six at swimming’s world championships on Saturday.

But Dressel, swimming’s squeaky-clean, tattooed glamour boy, helped refocus attention on the pool as he retained his 50 metres freestyle and 100m butterfly world titles in style, before leading the American mixed 4x100m freestyle team to a new world record.

“It doesn’t just come together by accident,” said Dressel, after becoming the first swimmer to win at least six gold medals at two world championships.

“It wasn’t easy but I don’t want it to be easy, I really don’t.” Bouncing on his toes like a prizefighter before the 50m free, Dressel exploded from the blocks and never looked back, clocking a championship best 21.04 seconds, comfortably clear of Brazilian Bruno Fratus and Greek Kristian Gkolomeev, who tied for silver in 21.45.

Dressel, who scooped seven gold medals at the 2017 world championships in Budapest, let out a roar of delight but had very little time to savour the moment.

After the shortest of breathers, the 22-year-old was back for the 100m butterfly final and after a long, hard stare down lane four, he got it done again.

Once again making his signature fast start, the American touched in 49.66 -- the second-quickest swim ever, a night after shattering Michael Phelps’s 10-year-old world record.

Russia’s Andrei Minakov took silver a full body-length behind, with South African Chad le Clos third. Just when his rivals thought it was safe to get back in the water, Dressel gave the United States relay quartet the lead they would keep, Simon Manuel bringing the Americans home in a world record of 3:19.40, just over half-a-second in front of Australia.

“I’m glad it’s over,” said Dressel, who also took a silver in the 4x100m mixed medley and could win a seventh gold in the men’s 4x100m medley relay on the final day.

“But tomorrow I will be ready to swim one more, and one more fast.”

A doping controversy followed when it was revealed Jack had failed a drug test, a development that could not have come at a worse time for Australia, after Mack Horton’s highly public podium snub of China’s Sun Yang on day one.

Horton refused to step on the podium in protest at claims made in a leaked FINA doping panel report that Sun had allowed blood vials to be smashed with a hammer after testers visited him last year.

Aussie sprinter Cate Campbell chose her words carefully when asked about Jack, who has denied knowingly taking a banned substance.

Meanwhile, American great Katie Ledecky displayed a champion’s heart to win her fourth successive 800m freestyle gold after being pushed to the limit by European champion Simona Quadarella. Ledecky, who withdrew from her 1,500m title defence and 200m heat through illness, held off the Italian to win in 8:13.58 and capture a 15th world title.

Elsewhere, Sweden’s Sarah Sjostrom swept to victory in the 50m fly in 25.02, becoming the first woman to win three world titles in the event.

Meanwhile, American swim queen Katie Ledecky said watching records tumble at the world championships inspired her to win a fourth straight 800m gold on Saturday despite an illness that threatened to derail her.

Ledecky, 22, withdrew from her 1,500m title defence and 200m heat earlier in the week in Gwangju and feared an early exit from Saturday’s 800m final after a return of the mystery bug that has plagued her for days.

“I got to the pool this morning to warm up and felt a little nauseous again which wasn’t great,” she said. “I had a brief moment of doubt there but pulled it together and made it happen today.