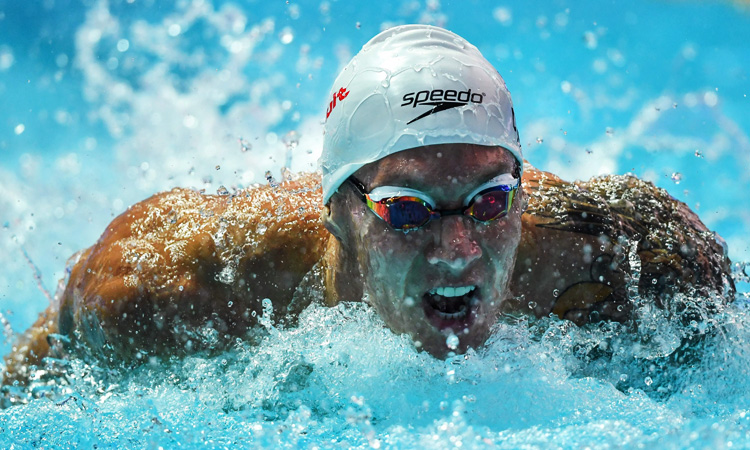 Dressel competes in a heat for the men's 100m butterfly event during the swimming competition at the 2019 World Championships, South Korea, on Friday. Manan Vatsyayana/ AFP

American Caeleb Dressel completed a busy turnaround to fire off the best heat times in the 100 metres butterfly and 50m free as he began the defence of his world titles on Friday.

The 22-year-old, who retained his 100m freestyle crown in the second fastest time ever on Thursday, clocked 50.28 seconds in Gwangju — over a second quicker than Hungary’s Kristof Milak and South African Chad le Clos.

Dressel’s heroics have helped turn the spotlight back on swimming after a week of athlete protests and forthright remarks targeting China’s Sun Yang, the 11-time world champion who a FINA doping panel report has accused of destroying blood vials after a visit from drug testers.

Sun’s Australian coach Denis Cotterell told AFP that the hulking Chinese athlete has been made a scapegoat for grievances other swimmers have against FINA, the sport’s governing body.

“You can’t have the performances he’s had over the years without doing the work... He’s tested year in, year out and winning every year over this period of 10 years.”

Dressel slowed down as he came home in the 100m fly but still posted the eighth quickest time in history, before punching in a 21.49 to top the time sheets in the 50m free preliminaries.

“I didn’t really know how that double was going to go coming off the emotional and physical energy from last night,” said Dressel, who has already won three gold medals this week after scooping seven at the 2017 world championships in Budapest.

“Usually in the mornings after a good swim you’ve got to dial it in. I think I did that but it’s harder than most days when you have the adrenaline pumping on its own.”

Milak smashed Michael Phelps’s world record to win the 200m fly earlier this week and Dressel appears in the mood to break the American legend’s 2009 world best of 49.82 in the 100m.

“I kind of slowed it down at the end,” Dressel said, looking to the evening’s semi-finals.

“Wanted to save some for tonight.”

American great Katie Ledecky, who has been battling poor health this week, set the second-fastest time in the women’s 800m free but appeared shattered after climbing out of the pool.

Reigning champion Ledecky clocked 8:17.42 — a fraction behind fellow American Leah Smith — after pulling out of the defence of her 1,500m title and 200m heats earlier in the week through illness.

The five-time Olympic gold medallist returned with a strong leg in Thursday’s 4x200m freestyle as the United States took silver behind Australia.

Sun, meanwhile, is set to lead China in the evening’s 4x200m freestyle relay.