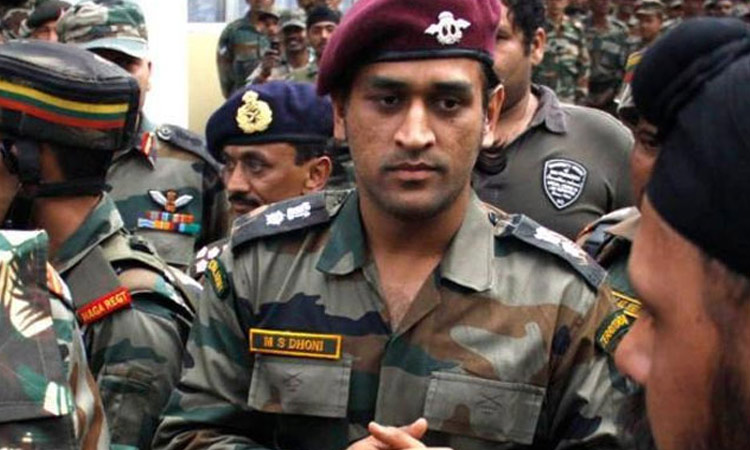 MS Dhoni with his army colleagues during a training session. File

The 38-year-old Dhoni, an honorary lieutenant colonel in a reserve force, will go on patrols with the 106 Para TA Battalion during his stint in the troubled region where tens of thousands have died since an insurgency erupted three decades ago.

"Mahendra Singh Dhoni will be deployed in Kashmir with his regiment between July 31 and Aug.15," an army source told AFP on condition of anonymity.

"He will be doing patrols, guard and post duties," the source added. Dhoni is to spend two months with the military in all.

The honour was accorded to him by the Indian Army in 2011. Dhoni was given this honour along with Abhinav Bindra and Deepak Rao.

In 2015, the Ranchi lad became a qualified paratrooper after having completed five parachute training jumps from Indian Army aircrafts in the Agra training camp.

Dhoni, who led India to their 2011 World Cup triumph, got into trouble during the World Cup in England for having his regiment's insignia on his wicketkeeper's gloves.

When he opted out of the West Indies series, that starts August 3, speculation mounted that he may retire.

The wicketkeeper-batsman gave up Test cricket in 2014 but remained India's mainstay in limited-overs and is often seen as a key aide to skipper Virat Kohli.

His uneven form at the World Cup set off talk of retirement even though the country's chief selector said the board would not tell any individual when to quit.

India, who lost their World Cup semi-final to New Zealand, have been grooming Rishabh Pant to take over as number one wicketkeeper.