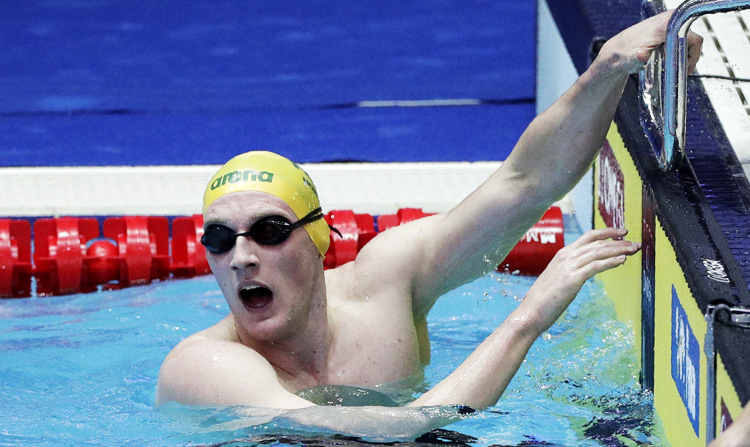 Mack Horton reacts after his heat of the men's 800m freestyle at the World Swimming Championships in Gwangju, South Korea, on Tuesday.

Australian swimmer Mack Horton has been warned by FINA after he snubbed his Chinese rival Sun Yang on the podium after the world 400 metres freestyle final.

The Australian’s protest reignited their row at the 2016 Rio Olympics, where Horton labelled Sun a “drug cheat” over a prior doping ban before pipping him to gold.

It also angered Sun, who accused Horton of “disrespecting China,” and triggered a backlash on social media with the Aussie’s Instagram was trolled by Chinese users, some even posting death threats against Horton and his family. 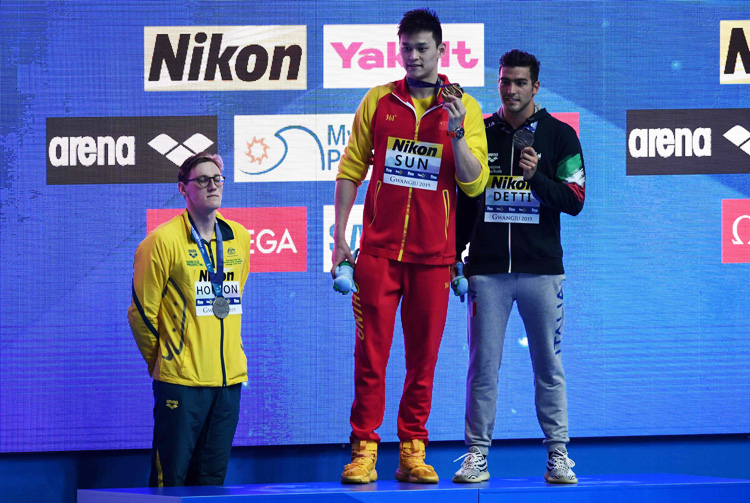 “The FINA executive... has decided to send a warning letter to Swimming Australia and to Mack Horton,” said a statement from swimming’s governing body.

“While FINA respects the principle of freedom of speech, it has to be conducted in the right context.

“As in all major sports organisations, our athletes and their entourages are aware of their responsibilities to respect FINA regulations and not use FINA events to make personal statements or gestures,” it added.

Sun, who has always protested his innocence over the three-month suspension he served in 2014, is again competing under a doping cloud after a leaked FINA doping panel report alleged he smashed blood samples with a hammer after being visited by testers last year.

FINA cleared Sun to take part in the world championships, but the World Anti-Doping Agency has appealed the decision to the Court of Arbitration for Sport (CAS).

“The matter over which Mack Horton was allegedly protesting is currently under review by CAS and therefore it is not appropriate for FINA to prejudice this hearing by commenting further,” the FINA statement said.

After the pair’s war of words in Rio, China’s state-run media called Australia a “second-class citizen” of the West and accused it of “white supremacy.”

The China Daily weighed on their latest run-in, saying Horton had “humiliated himself” with his protest.

“Needless to say such moves are rather rude and lack the most basic manners,” it added in a commentary.

“Not joining Sun on the podium was not a protest, but an insult.”

Horton, also beaten by Sun at the 2017 world championships in Budapest, could clash with him again in the 800m freestyle.

Both men go in Tuesday morning’s qualifiers, although not in the same heat.

Swimming Australia voiced its support of Horton on Tuesday in reaction to the FINA warning.

“We are very proud of our Dolphins’ performances in Gwangju so far and want to allow them to focus on their racing for the remainder of the meet.”