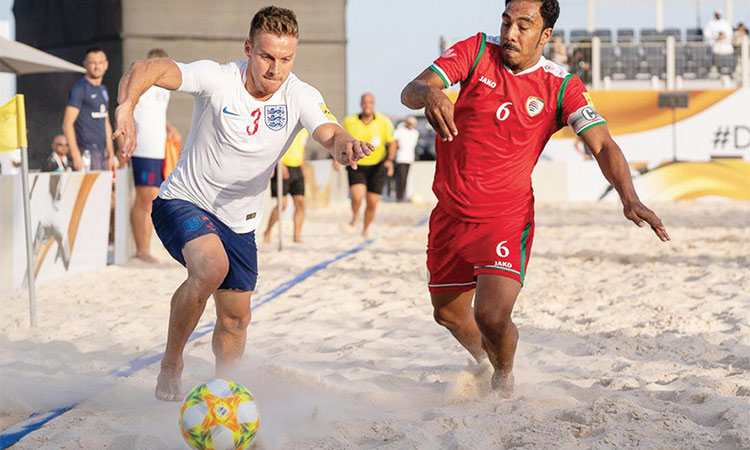 Players of Oman and England in action during their Neom Beach Soccer Cup match in Saudi Arabia on Friday.

The final game in Group B saw the Three Lions fight for a one last chance at points in an attempt to make third-place play-off.

It was a tight opening period of play, which saw both sides threaten and waste promising chances in front of goal but it was Oman who drew first blood.

The deadlock was eventually broken by Sharif who hit a fine striker to edge Oman ahead with just two minutes of the first period to go.

But the Omanis couldn’t extend their lead in the second half, as England fought off their increased attacks well.

However, Mitchell’s men couldn’t find the net themselves and the second whistle sounded with still just one goal separating the teams.

Right from the restart Oman were on their English rivals, and within seconds had finally doubled their lead through Mandhar. Then a sweet volley from Mushel saw Tommy Jackson beaten at the near post as Oman went three head.

Aaron Clarke had a chance to pull one back for England with less than two minutes on the clock but saw his effort saved.

But time ran out for the men in white, and they will now face China in the play-off for fifth-place. Oman, however, will play the final of the inaugural edition of the event.

The reward for victory in the game between the hosts and their Egyptian neighbours was a final match-up against Oman.

Saudi Arabia may have been the underdogs, as well as the hosts in this competition, but they had already shown that they were able to beat experienced teams, after having taken a victory over China on day one.

The opening period was closely contested and the scoreline, thanks to the heroics of the goalkeepers at both ends, was kept untouched as the first whistle blew.

It may have been the influence of the members of the Saudi Royal family in the crowd, but the men in green seized control of the game in the second period, scoring two goals as Saleh bagged a brace to excite the crowd.

However, the Pharaohs had a reply late in the period, as Mohamed glided in at the far post to head in number one, then Samir equalised with just a minute left to play.

The last 12 minutes began with the teams back on level terms, but Sasa put Egypt ahead in style when he powered in a freekick from his own half.

The Saudis came painfully close to finding a late equaliser and forcing extra time, but the final goal went to Egypt and Samir put away another free kick to wrap up the points and seal the place in the final.

Six team including Argentina, England, China, Egypt, UAE and hosts Saudi Arabia are competing in the inaugural edition of the FIFA-approved tournament.

Meanwhile, Jakub Jesionowski’s goal in literally the last second of the game helped Poland overcome the Czech Republic and grab the first points at stake in the European qualifier for FIFA Beach Soccer World Cup.

Despite Madani got the Polish a pretty comfortable lead, scoring tow goals in the first and the second period to have his side 2-0 ahead, the Czechs would react in the last frame to get Stanislawski’s lads against the ropes until the very last breath in the game.

Tomas Hurab would pull the first back for the Czech Republic, and that would spur Dlouhy’s team and push them to fight for the comeback.

After many unsuccessful attempts, and with just four seconds left in the score, Daniel Vales scored an equalizer that seemed to send the game onto extra time.

But, amazingly enough, Poland made the most of the remaining 0,06 fraction of a minute to untie the score, with Jesionowski leaving the Czechs helpless and capturing an amazing win for his side. 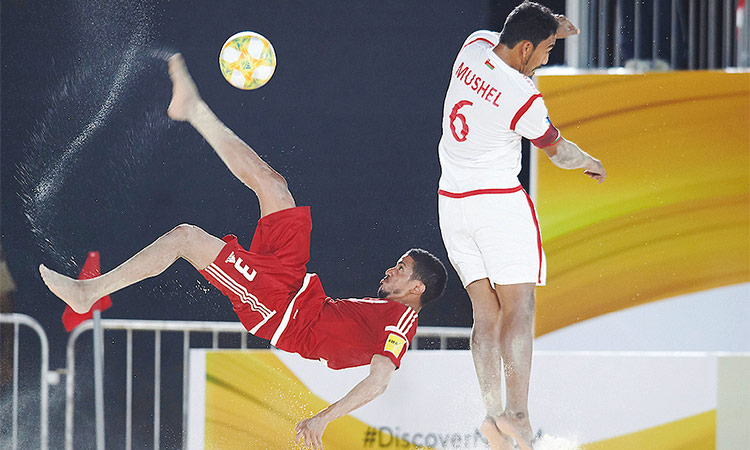