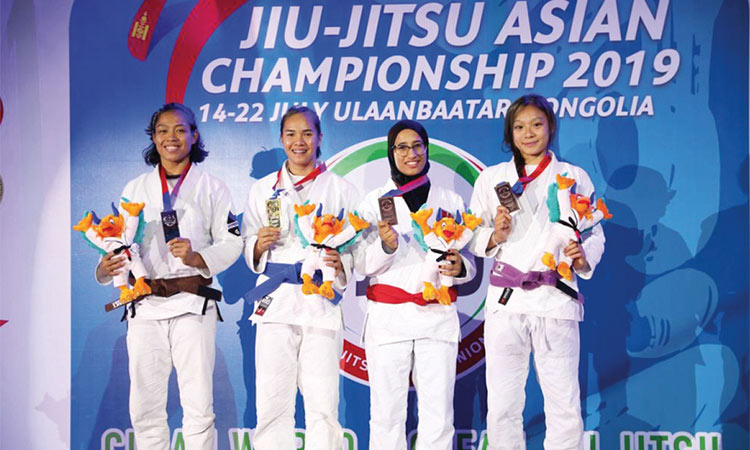 Winners pose with their medals after the presentation ceremony at the 4th Jiu-Jitsu Asian Championship.

With the UAE leading the Championship standings after the country’s male athletes dominated proceedings in the Mongolian capital of Ulaanbaatar, the UAE Falcons’ female athletes continued the medal haul.

The final day of action saw Mariam Alameri clinch gold in the over 70 kg category and Wadima Alyafei win silver at 45 kg, while Bashayer Almatrooshi and Maha Alhinaai secured bronze in the 64 kg and 57 kg divisions, respectively.

The medals took the UAE’s closing tally to 11, including four golds, one silver and six bronzes. Thailand finished second overall with four golds and two bronze medals, while South Korea ranked third with two golds and a silver.

With the UAE Jiu-Jitsu Federation (UAEJJF) aiming to expand the pool of UAE Falcons competing at all levels of the sport, including youth and professional, the national team’s performance in Mongolia evidenced a new generation is already carrying the country’s Jiu-Jitsu torch.

“Winning a gold in the Asian Championships has been a dream since my childhood,” said Alameri, who broke down in tears after winning her 70 kg final.

“These are tears of joy and I thank God for this success. Standing on the throne of Asia is an historic moment in my career and this medal is the direct result of dedication and hard work – I trained for four hours on a daily basis ahead of this event.

“I would like to dedicate my gold to the Federation and the UAE’s leadership as they provide all the support to help us in perform in such high standards. I would also like to thank my family and everyone who has supported and encouraged me,” added Alameri.

Speaking after the final day of competition, Batran lavished praise on the UAE Falcons’ male and female athletes for their spectacular results in Mongolia.

“We are thrilled with the results achieved in Ulaanbaatar; our athletes have made us very proud,” said Batran.

“We are the champions of Asian Jiu-Jitsu and I congratulate the entire team for giving their best. I would also like to commend the athletes who did not win medals because they played a key role in helping their teammates compete at such a high level and raising the UAE flag high over the Asian continent.”

Batran also praised the UAE Embassy in Mongolia and Tunaiji, the UAE Ambassador to Mongolia.

“They have done everything in their power to facilitate the mission of the UAE team and we commend their contribution to this outstanding success; team UAE has delivered on all fronts.”

Manhali added: “When you consider the remarkable development in the level of Jiu-Jitsu across many Asian countries, this was the most-competitive Asian Championship to date. The emerge victorious underlines the amazing performance of our men and women.”

With 349 entries from 21 nations across Asia, the event was one of the most competitive editions to date, demonstrating the growing strength and popularity of jiu-jitsu across the continent.

On Thursday, Omar Al Fadhli and Zayed Al Katheeri won gold in the under 62 kg and 56 kg categories respectively.

The UAE got another medal through Ali Al Ghaithi, who won bronze in the under 56 kg division.

Fadhli insisted his achievement highlighted the success of the UAE Jiu-Jitsu Federation’s wide-reaching domestic programmes and the astute leadership of chairman Abdul Moneim Al Hashemi for creating an environment where the UAE Falcons can perform at the highest level internationally.

“My focus was not purely on winning the gold, I simply wanted to honour my country in this huge continental sports forum,” said Fadhli.

“Winning gold enhances my desire to keep competing on a global level, but the real pleasure is seeing the UAE flag raised higher than all others in this competition.” 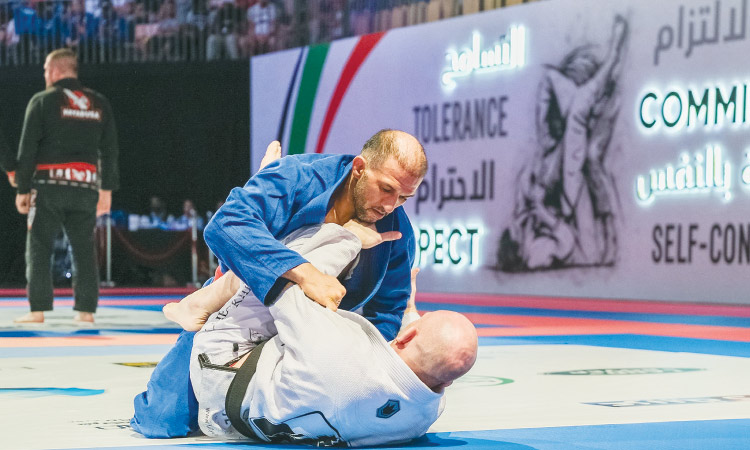