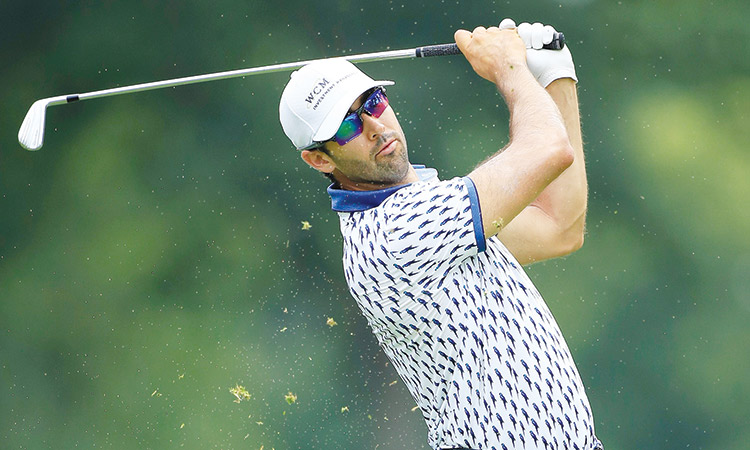 Cameron Tringale plays a shot on the 17th hole during the John Deere Classic on Saturday. Agence France-Presse

Landry followed up his back-to-back 65s over the first two rounds with a four-under-par 67 at TPC Deere Run in Silvis, Illinois.

That was good enough to send him to the top of the leaderboard alongside Tringale, who carded seven birdies against one bogey on his way to a six-under-par 65.

Tringale is yet to win a solo title on the PGA Tour while Landry is chasing only his second career win following victory in the Valero Texas Open last year.

Tringale’s low-scoring round came despite a bogey on the first hole. He recovered from that setback with birdies on the 2nd and 3rd, before making three more before the turn.

Meanwhile, South Korea’s Kim Sei-young fired a five-under-par 66 to preserve a one-shot lead after the third round of the LPGA Tour’s Marathon Classic on Saturday.

Kim, who started the day one clear of the field after a dazzling seven-under-par 64 on Friday, produced a flawless charge on the back nine to stay on top of the leaderboard heading into the final round.

The 26-year-old from Seoul carded seven birdies and two bogeys to finish the day with a 16 under total after 54 holes at the Highland Meadows Golf Club in Sylvania, Ohio.

Elsewhere, Austrian Bernd Wiesberger fired a six-under-par 65 on Saturday to seize a two-shot lead heading into the final round of the Scottish Open.

The world number 83 had moved into a tie at the top with a course-record 61 on Friday, and he backed it up with an effort featuring seven birdies to reach 20-under for the tournament.

The 33-year-old will play alongside South African Erik van Rooyen in Sunday’s fourth round as he bids for a sixth European Tour title and second of the year.