Australian all-rounders Maxwell and Stoinis out of Ashes calculations - GulfToday

Australian all-rounders Maxwell and Stoinis out of Ashes calculations 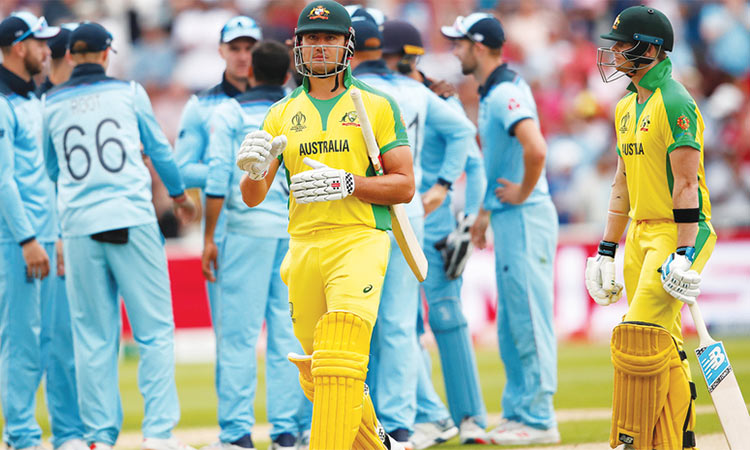 Glenn Maxwell and Marcus Stoinis are excluded from a 25-player squad for an intra-Australia clash to be held in Southampton from July 23-26.

All-rounders Glenn Maxwell and Marcus Stoinis have been excluded from a 25-player squad for an intra-Australia clash that will go a long way to deciding the makeup of Tim Paine’s Ashes side.

Both Maxwell and Stoinis had a disappointing World Cup during Australia’s run to the semi-finals in England, with Maxwell wearing plenty of criticism for his repeated failures with the bat.

The extended squad has seven players from the World Cup campaign, 15 from the Australia A squad touring England and three players — pace bowler Peter Siddle, and batsmen Cameron Bancroft and Marnus Labuschagne - who have been playing in the English county circuit.

Players from the squad will be picked in an Australia versus Australia A clash from July 23-26 in Southampton, with Ashes spots on the line ahead of the first Test against England on Aug. 1 in Edgbaston.

Former captain Steve Smith and openers David Warner and Bancroft have all been included, the first time the three have been selected in an Australia squad since serving lengthy bans for the ball-tampering scandal in Cape Town in March, 2018.

“Cameron (Bancroft) was making a fair amount of headway when he played test cricket last for Australia and that was in South Africa,” said national selector Trevor Hohns. “He’s playing with Durham in the County Championship ... He’s scoring runs on a pretty regular basis.”

Alex Carey is one of three wicketkeepers picked alongside Test captain Paine and Tasmania’s Matt Wade following a solid World Cup behind the stumps.

“He’s proving himself to be a very smart cricketer,” said Hohns.

“Batting-wise he was very, very good ... We’ve been very impressed with his glovework for some time now so he’s progressing nicely.”

Usman Khawaja’s participation in the trial match is uncertain as he races to recover from a hamstring strain sustained during the World Cup loss to South Africa.

Despite a mixed buildup after they won just three of 18 matches in last 14 months until March this year, Aaron Finch’s team entered the tournament as one of the favourites having beaten India and Pakistan in away series.

They stretched their winning streak to 10 matches until their 36-run loss to India at The Oval in the pool phase of the tournament.

Finch’s men then won another five in succession before they lost to South Africa at Old Trafford in their last game before the semi-final.

Much of their success at the tournament was built on a patient approach from their opening batsmen with the pair of Warner and Finch both assessing conditions expertly to score over 500 runs in the tournament.

It was a far cry from the tactics favoured until earlier this year when they tried to emulate England’s all-out attacking approach by selecting power-hitting Twenty20 players like D’Arcy Short and Chris Lynn at the top.

Short and Lynn, however, were victims of a rotational selection policy with numerous changes to the team personnel over the last four years, ostensibly to rest senior players for test matches.

“It probably does, to be honest,” Ponting said, when asked whether England’s 50-over success could spill over.

“The country will be on a bit of a wave and a bit of a high, the players will certainly be on a huge high after that World Cup.

“But who knows if they don’t (win), it might have an adverse effect on their Ashes campaign as well.

“You can take lots of things from different series. It’s a completely different series going into an Ashes and there will be quite a few different players in their Test team than will be in this one-day team. They’ll have different captains as well.

“But I’m sure if they happen to win the World Cup, they’ll take as much as they can from it going into the Ashes.”

Australia hold the urn after thrashing England 4-0 on home soil in the 2017-18 Ashes.

Ponting, hired as an assistant coach to Justin Langer for Australia’s World Cup campaign, watched Finch’s side fall to South Africa and England in successive matches to bow out of the tournament after they had been the first side to book their place in the semi-finals.

Injuries did not help Australia’s cause and Ponting was not prepared to wear the blame for the side’s tactical preparations.