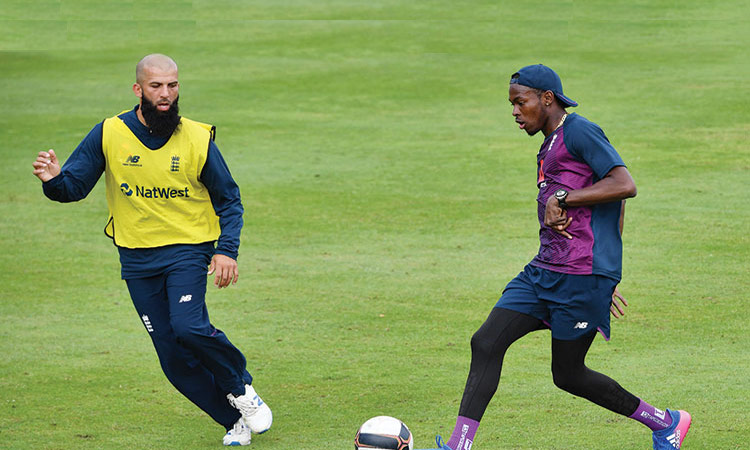 England quick Jofra Archer will keep up his aggressive approach in Sunday’s World Cup final against New Zealand after his bouncer left Australia’s Alex Carey with a bloodied chin in Thursday’s semi-final at Edgbaston.

The fast bowler gave England a great start by dismissing Australia captain Aaron Finch for a golden duck before knocking off Carey’s helmet with a short delivery that required six stitches on his chin.

“You don’t always mean to hit them,” said the Barbados-born 24-year-old.

“It can be a wicket-taking ball or a dot ball. When it hits them you feel a little bit bad for doing it, but it’s cricket and I don’t think he’ll be the last person to get hit.”

Known for his ability to crank up speed without any visible effort, Archer has added the ‘knuckle-ball’ to his armoury and deceived Glenn Maxwell with a slower delivery in the semi-final.

It is, however, his pace and bounce which troubles the batsmen most and Archer said short balls would always remain a major weapon for him.

“I try to use my two bouncers every over anyway. It wasn’t just a set plan. I do it all the time.”

Off the field too, Archer involuntarily created a flutter when some his old tweets resurfaced and looked eerily accurate in terms of his prediction for the World Cup.

After he knocked off Carey’s helmet, his 2013 tweet saying “All batsmen buy 2 helmets cause when we meet they will be in use” started doing the rounds. But Archer, 24, denied being a Twitter Nostradamus.

“I have seen it but I don’t know why it should be a big thing,” he said. “It’s just social media. That’s all it’s there for.

“I used to do it when I was just watching cricket back home... They are just recycled. Some are from series, some from World Cups, stuff that just happened.”

Despite Archer having played only 13 one-day internationals, former England captain Michael Vaughan expects him to make his Test debut in the Ashes series against Australia next month.

Archer, who has been battling a side niggle for a while, said his focus remained on helping England triumph at Lord’s where they will bid to win their first World Cup.

“After Sunday, I’ll probably answer that (Ashes prospects) but for now I’m just focusing on trying to win the final,” he said.

“I’ll keep soldiering on. I have been for a few games now and it’s not got any worse.”

It has been a remarkable rise for Archer, who only made his international bow against Ireland at the start of May.

The 24-year-old finished with figures of 2/32 from his ten overs against the Aussies. “It hasn’t sunk in just yet. I’m just happy to play games and win games,” Archer said on the reaching the final. “We probably would have batted first. Personally I like to bowl first and get the work done.

“Emotions were definitely flying after that (first wicket). Everyone looked a lot more focused and switched on.

“I’m just glad the team is doing well. I could be doing terribly but as long as the team is winning, I’m alright. It’s been mixed feelings at Lord’s. Sometimes I do ok, sometimes I don’t do as well as I’d like. Hopefully Sunday will go England’s way, not just my way but England’s way.”

Former England captain Michael Vaughan has forecast that Archer will make a Test debut in the Ashes series against Australia that starts at Edgbaston next month.

But Archer, who has been managing a side injury in recent games, said talk of a Test call-up could wait.

“After Sunday, I’ll probably answer that but for now I’m just focusing on trying to win the final,” he said. “I’ll keep soldiering on. I have been for a few games now and it’s not got any worse.

“I was probably going to rest anyway but I don’t think Sussex are going to flog me right now.”