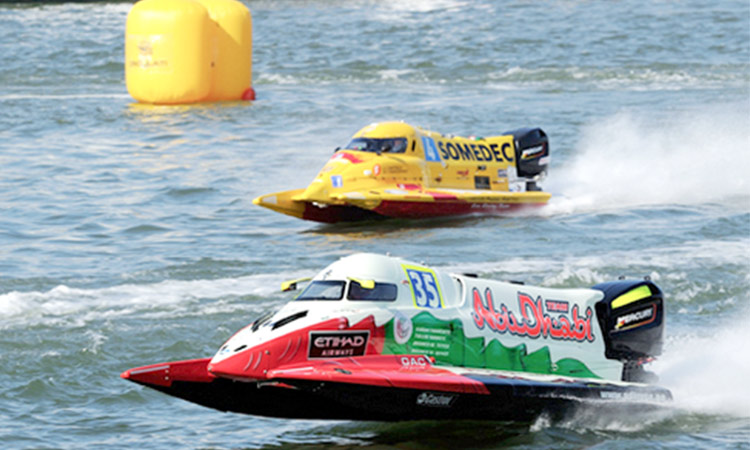 Abu Dhabi 35 are firm favourites heading into the decisive round of the World Endurance Championships.

The reigning F1 world champion along with Emiratis Rashed Al Qemzi and Rashed Al Tayer and Italian Tullio Abbate in Abu Dhabi 35 are firm favourites heading into the decisive round of the World Endurance Championships getting under way in Augustow on Saturday.

But before starting Friday’s official practice session on the Necko Lake, Torrente made it clear that the crew will need to reproduce the level of performance which gave them an emphatic win in the 24 Hours of Rouen in France two months ago.

With the first of two six-hour races to follow tomorrow, Torrente said: “The key is to be patient, and not push too hard, especially in the first race. Just as it was in Rouen, we can’t afford to do anything to damage the boat. “We need to avoid any mistakes, stay calm, and collect points over both days. The mood is very good and we bring a lot of confidence into this event after the win in Rouen. We’re all excited about the weekend and the chance to clinch the world championship.”

Also among the top contenders in Poland are the all-Emirati crew of Faleh Al Mansoori, Rashed Al Remeithi, Majed Al Mansoori and Mohamed Al Mehairbi who took Abu Dhabi 36 to third place in France. The first six-hour race on the Necko Lake gets under way at 9am local time on Saturday with the second starting at 11am on Sunday.

Both Team Abu Dhabi crews were together in Evian last weekend where second place in the Grand Prix of France saw Torrente maintained his lead in this season’s UIM F1H2O World Championship.

Meanwhile, Qemzi leads the F2 title race after his dramatic victory in Lithuania. From Poland Torrente heads straight for Stresa, Italy to begin his defence of the UIM XCAT World Championship in partnership with Mansoori next weekend.

“It’s a busy schedule but I’m really up for the challenge,” said the Miami-based driver.  “We have a great team atmosphere and fantastic technical and all round support.  “We all know what we need to do and we’re all focused on getting everything right on the day.”

The UIM F1H2O title race is very much on and wide open as the champion breaks for the summer, with just three points separating champion Torrente and Jonas Andersson.

Abu Dhabi were the inform team, the winning team the target for the last six Grand Prix, Andersson, Marit Stromoy and Peter Morin knocking on the door and leading the fight to unseat them, in Evian at the Grand Prix of France Team Amaravati’s Andersson walked through it to end their winning run and set up a thrilling prospect for the second half of the season.