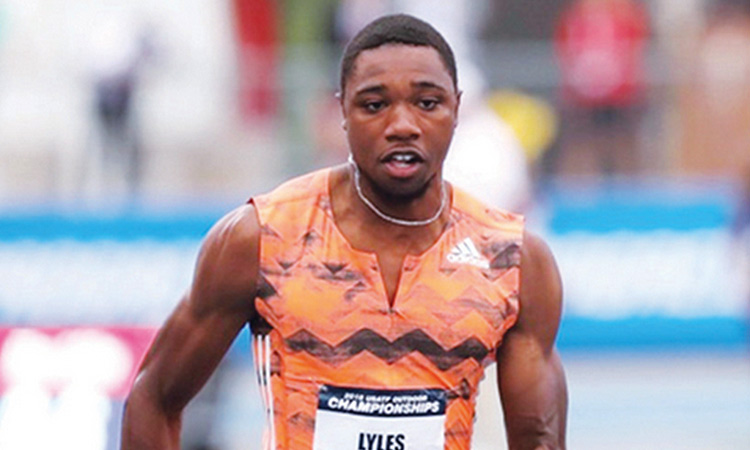 Noah Lyles insists he would push himself to the maximum in the 100 metres in Friday’s Diamond League meet in Monaco.

Just a week after becoming the fourth-fastest 200m sprinter of all-time, fast-emerging US sprinter Noah Lyles fired a warning shot by insisting he would push himself to the maximum in the 100 metres in Friday’s Diamond League meet in Monaco.

The 21-year-old timed a breath-taking 19.50 seconds in Lausanne, only Usain Bolt, Yohan Blake and Michael Johnson having gone quicker.

“It was really exciting,” Lyles said of his performance.

“Running is my passion, so running fast each and every time and getting better and better is the exciting part of track so it makes my job, coming out to Monaco to run the 100m, even more exciting.”

Lyles added: “The 200m went really well, I’ve definitely seen an improvement there and we’ve been doing practice in the 100m so I think Friday could be a race where I can put everything together and see how far I can push myself. “There are nothing but fast times expected, all round.”

But Lyles would not commit to what time he expected would win the race, which also features American veteran Justin Gatlin, the 2004 Olympic gold medallist and current world champion.

In attempting to improve his 100m start, Lyles said he had been working with Ralph Mann, a 1972 Olympic 400m hurdles silver medallist for the USA who went on to become a leading sports biomechanist who also helped Gatlin.

Lyles said Mann had him working on strength using pressure pads, with the goal being to apply that pressure from the blocks into his start.

“I’ve definitely gotten a lot stronger,” he said. “I’m finally starting to get it.”

Gatlin aside, Lyles’ hopes of conquering the track in a season when the world championships take place in Doha between Sept.28-Oct.6 will also depend on the form and fitness of fellow young guns Christian Coleman and Michael Norman.

“All three of us have the same goal: we want to be world champions and we’re all hard workers for it.

“I am really hoping the shoot-out comes, but at the same time I want to be the only runner that everyone sees, that’s every runner’s dream.”

Defeat by Norman over 200m in Rome, Lyles maintained, had opened his eyes.

“I enjoy the competition... The excitement (in losing in Rome) came from ‘Now I know there’s someone out there who can beat me’ and that makes me want to train harder.” Lyles played down his chances of attempting a sprint double at the Doha worlds, with harsh timetabling at the US trials a major stumbling block.

“I’m not out there dominating. I’ve won a few here and there. When I come out I want to say I’m planning to do the double and I want to win both.”

At 37, the American who served a four-year doping ban between 2006-10 admitted the time to hang up his spikes was approaching.

“I haven’t really thought about exactly the end date per se. Obviously, it would be great to end on an Olympic cycle, being at the Olympics in 2020 would be a great time to finish,” he said.

“I’m not looking to go for 40, going for records and being the oldest guy, that would be more of a parlour trick for me.

“I want to be in a great competition and when I want to run, I definitely want to be in the top three. I think, at 40, that’s a long way away from me.”