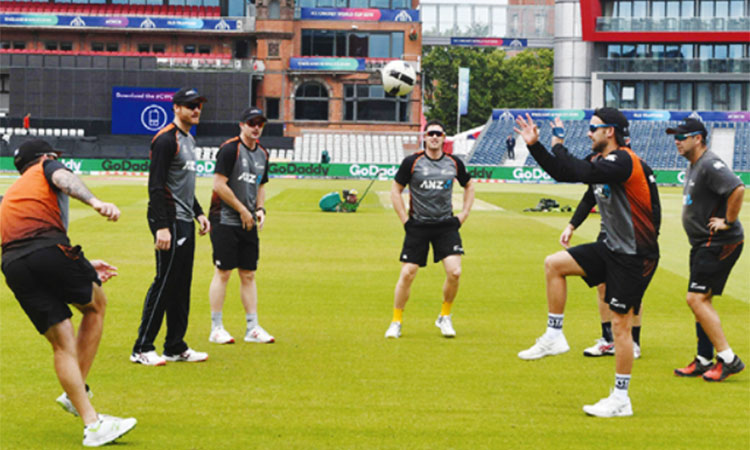 New Zealand players play football as they take part in a training session at Old Trafford in Manchester on Monday. Agence France-Presse

Sharma has smashed a record five centuries in a single World Cup to lead the tournament batting charts with 647 runs from eight innings.

Kohli has hit five fifties but a hundred has so far eluded the world’s top ODI and Test batsman, who is happy to let Sharma play the more aggressive role once again when they face New Zealand at Old Trafford.

“It’s been a different kind of role that I have had to play in this World Cup. As the captain of the team I have been open to play any role that the team wants me to,” Kohli told reporters on Monday.

“It’s great that Rohit is playing so consistently which means that coming in the later half of the innings you have to play a different role, which is controlling and letting guys like Hardik (Pandya), Kedar (Jadhav) and MS (Dhoni) and Rishabh (Pant) come out and express themselves.

“I have understood that roles can vary a lot in one-day Cricket depending on the time you step in to bat.”

Sharma comes in to the New Zealand contest on the back of three successive tons and two 180-plus opening stands with partner KL Rahul.

Kohli, who bats at number three, was unbeaten on 34 when India won their final group game against Sri Lanka on Saturday and insists he is happy doing his more low-key job.

“I’ve been very happy with holding one end and letting guys express themselves, striking at 150, 160 or 200 if the team needs. I know that I can accelerate in the end,” Kohli said.

“I hope he (Sharma) gets two more (centuries) so that we can win two more games because it’s an outstanding achievement.

“He deserves all the credit and, according to me, he’s at the moment the top ODI player in the world.”

Meanwhile, New Zealand captain Kane Williamson encouraged his frontline batsmen to play with freedom against India to overcome their struggle for rhythm in the World Cup.

Not surprisingly, Williamson is New Zealand’s leading scorer after the group stage with 481 runs from eight matches at a 96-plus average. The next Kiwi batsman in that list is veteran Ross Taylor, way down with 261 runs and an average of 37.28.

Williamson said his fellow batsmen had struggled to adjust to diverse English conditions where a winning total can vary greatly according to the state of the pitch on the day.

“We were certainly expecting that it would be tough. But what we didn’t quite expect coming into the tournament was the large variety of conditions that we faced,” Williamson told a news conference at Old Trafford.

“That definitely made perhaps batting with any rhythm a real challenge for everybody, so being able to adapt with the bat and just trying to contribute ... is certainly the most important thing.”

“It’s just a great occasion to be a part of. I know the guys are really excited by the opportunity to go out and try and try and play with that freedom that when we do gives us the best chance.”

Addressing a news conference before him, India captain said the “special” Williamson controlled the team’s tempo and would naturally be a key wicket for the Indian bowlers.

Williamson denied New Zealand were too reliant on him to give their bowlers a decent, defendable total.

“No, I think there’s also been a number of other contributions that have been really important for us to get to where we are right now,” he said.

“You never sort of put a number on it. That is why we all practice as hard as we can to try and make those contributions bigger and better.”