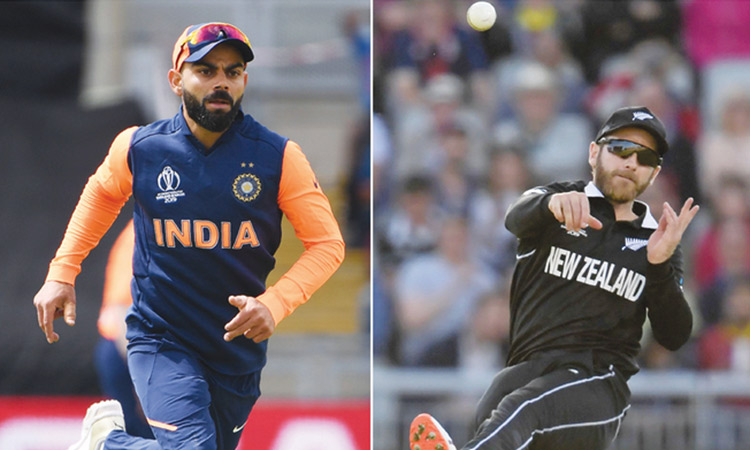 The two star batsmen first encountered each other in youth cricket, with Kohli — an occasional medium-pacer — taking Williamson’s wicket via stumping when they were both captaining their countries in a 2008 Under-19 World Cup semi-final in Kuala Lumpur.

India went on to win that match and beat South Africa in the final. “When we meet tomorrow, I’ll actually remind Kane,” Kohli, now aged 30, told reporters during his pre-match press conference on Monday when asked about that Under-19 clash.

“I’m sure he remembers. It’s quite a nice thing to realise that 11 years after captaining our respective nations, we’ll do so again in a senior World Cup from the Under-19s.

“We’ve spoken about it before, a lot of players from that whole World Cup, from our batch, from their batch, from other teams as well, made it to their national teams and are still playing, which is a great thing to see.

“It’s a really nice memory and we’ll both feel good about knowing this is happening. Neither me nor him could have ever anticipated one day that this will happen but it’s a really nice thing.”

Reminded that he had dismissed Williamson, Kohli said: “I got Kane’s wicket? Did I? I don’t know if that can happen again.”

Williamson’s memories of his dismissal were equally vague: “Oh dear. Tell me how? He (Kohli) used to be an all-rounder back in the day but he hasn’t bowled as much recently.

Kohli first became aware of Williamson’s talent a year before the match in Malaysia.

“I remember 2007 when we went to New Zealand, playing an Under-19 Test match and he played a shot off one of our fast bowlers, who was quick, off the back foot. “I remember standing in the slips and just telling the guys standing at slip ‘I’ve never seen anyone play a shot like that’.

“He was always the standout player and you could see even when we played New Zealand in New Zealand on their Under-19 tour and then, yes, the World Cup again, he was quite special for them.”

Williamson agreed that it was a special feeling to be pitting his wits against Kohli on a far grander stage and their early meetings.

“I guess that’s kind of cool that a few years later we’re here again, perhaps on a slightly different stage,” he said. Reflecting on his impressions of Kohli, Williamson added: “He was a formidable player. It’s obviously been a pleasure to watch Virat play and evolve into the superstar that he is.” The importance of Williamson’s contribution to New Zealand’s run to the last four, which includes match-winning hundreds against both South Africa and the West Indies, is underlined by the fact that his 481 runs represent nearly 29 per cent of the Black Caps’ total at this World Cup.

“We always knew he had the special ability to go all the way and now he’s controlling the tempo for New Zealand every game that he plays and he’s contributing so well,” said Kohli.

“He’s a lovely guy and we get along very well. He’s always been the main guy for them along with Ross (Taylor), who have performed really consistently.

“From our team point of view, getting both of them early will be crucial because we know how strong together they can be in a partnership.”

Meanwhile, New Zealand coach Gary Stead said he hoped Sachin Tendulkar would pass on his regards after the India great wished MS Dhoni a “happy birthday and all the very best for the next two games” ahead of their World Cup semi-final.

Dhoni, still India’s wicketkeeper and captain when a side featuring Tendulkar won the 2011 World Cup final, turned 38 on Sunday.

Tendulkar took to Twitter to pass on his best wishes but the implication of his remarks was that India would beat New Zealand in Tuesday’s semi-final and go on to face either hosts England or reigning champions Australia in the July 14 final at Lord’s.

Stead, asked what he thought of Tendulkar’s words, told reporters ahead of a New Zealand training session at Old Trafford on Sunday: “I’m sure he would do that.”