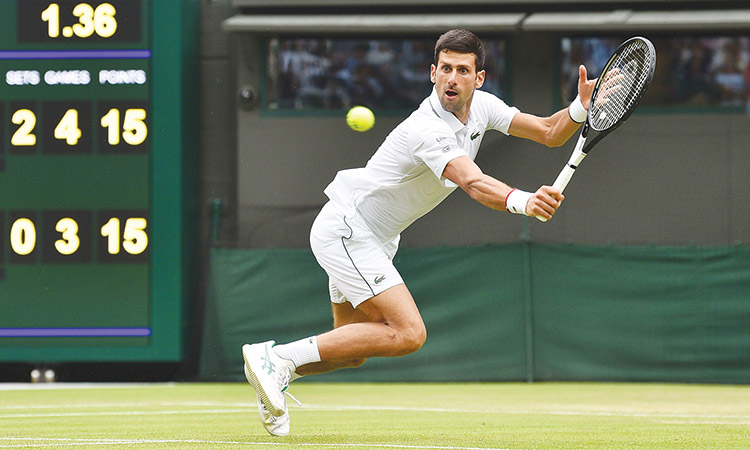 Novak Djokovic returns to Ugo Humbert (unseen) during their singles match of the Wimbledon Championships in London on Monday. Agence France-Presse

Roger Federer became the oldest man to reach a Grand Slam quarter-final in 28 years when he booked his place in the Wimbledon last-eight for the 17th time.

Eight-time champion Federer breezed past Italy’s Matteo Berrettini 6-1, 6-2, 6-2 in just 74 minutes to make sure of a spot in his 55th quarter-final at the Slams.

Earlier, Novak Djokovic and Rafael Nadal eased into the quarter-finals as the sport’s Grand Slam heavyweights continued to deliver blow after blow to their wilting lightweight rivals.

Defending champion and world number one Djokovic reached his 11th Wimbledon quarter-final and 45th at the majors with a 6-3, 6-2, 6-3 win over France’s Ugo Humbert.

Four-time champion and top seed Djokovic will face Belgium’s David Goffin for a place in the semi-finals.

Djokovic, 32, has a 5-1 career record over 21st seed Goffin who will be playing in his first Wimbledon quarter-final.

Humbert, the world number 66, had never played a match on grass before this season and was defeated in just one hour and 42 minutes.

Nadal next plays Sam Querrey, against whom he holds a 4-1 record.

The 33-year-old Spaniard is chasing his 19th title at the majors, which would put him just one behind the all-time record of 20 held by Federer -- his potential opponent in the semi-finals.

Goffin matched his best-ever performance at the majors by reaching his first Wimbledon quarter-final.

Also joining Nadal in the last-eight was his compatriot Roberto Bautista Agut who reached his first Wimbledon quarter-final and second at the majors this year when he defeated France’s Benoit Paire 6-3, 7-5, 6-2.

The 31-year-old world number 22 will face either 2016 runner-up Milos Raonic of Canada or Argentina’s Guido Pella for a place in the semi-finals.

With Djokovic, Nadal, Querrey and Bautista Agut all winning, there are already four 30-somethings in the last-eight.

At the opposite end of the age scale to 37-year-old Serena, 15-year-old Coco Gauff could not summon up yet another magical performance as the crowd-pleasing American went down 6-3, 6-3, to battle-hardened Romanian Simona Halep.

Having looked assured last week, while Serena was not altogether convincing, it was 23-year-old Australian Barty who cracked and went down in three sets to unseeded American Alison Riske 3-6, 6-2, 6-2.

The 29-year-old Czech sixth seed, in the fourth round for the first time since she won the second of her titles in 2014, bows out leaving just two of the top 10 seeds remaining, Halep and Svitolina.

There was one consolation for Barty as Karolina Pliskova could have taken her number one spot but the Czech third seed went out as well in a marathon duel beaten by compatriot Karolina Muchova 4-6, 7-5, 13-11

Serena, bidding for a 24th Grand Slam title to tie with Australian Margaret Court, will play Riske next after trouncing Carla Suzarez Navarro 6-2, 6-2.

For Riske it was perhaps an unexpected early wedding present -- she gets married after Wimbledon Stephen Amritraj, the son of former Indian Davis Cup player Anand -- but extremely well-earned.

It will be the 29-year-old’s first appearance in a Grand Slam quarter-final.

Halep unlike Gauff’s previous opponents did not let a partisan crowd nor some audacious strokeplay by the American unnerve her and always had the upper hand.

Gauff did save three match points but in the end former world number one Halep had little trouble in closing out the match.

The American, though, leaves having given the women’s game a much-needed shot in the arm and announced herself as a future Grand Slam contender.

World number 50 Zhang defeated Ukraine teenager Dayana Yastremska 6-4, 1-6, 6-2 -- a result far from her mind when she was talked out of retiring at her lowest point in 2015. 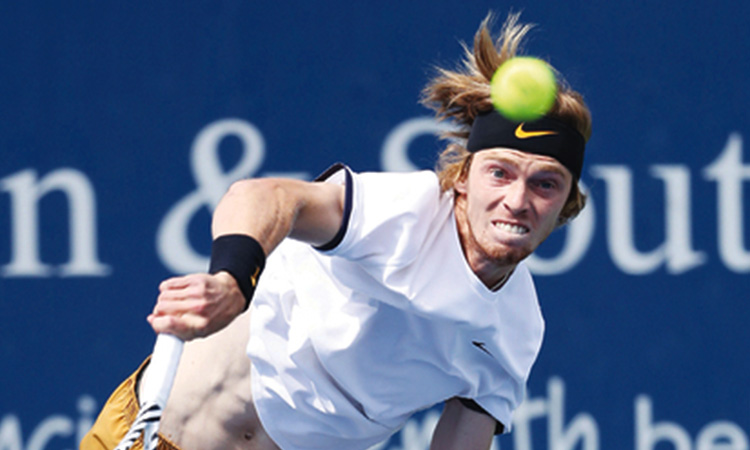 World number one Novak Djokovic has a remarkably clear road to the ATP Cincinnati Masters final after producing an efficient victory on Thursday while third seed Roger Federer crashed out of the US Open tuneup event. Djokovic was never in danger in his 6-3, 6-4 triumph over 53rd-ranked Spaniard Pablo Carreno Busta, whom he finished