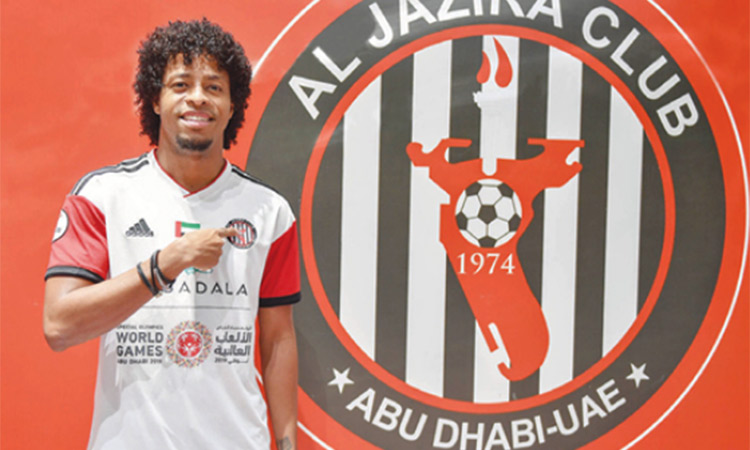 Al Jazira are delighted to announce the signing of the prolific Brazilian striker Marcos da Silva Franca. The 29 year-old Marcos da Silva França, popularly known as Keno or Marcos Keno, will join his new ‘Pride of Abu Dhabi’ team-mates for the first time during this month’s summer training camp in the Netherlands for the new 2019-20 season.

Born in the Brazilian city of Salvador, Keno who plays mainly as a left winger, is also adept at playing on the right wing and as a second striker.

Keno brings plenty of experience to Al Jazira having played for Atlas Guadalajara in Mexico, Botafogo and Palmeiras in Brazil before joining the Egyptian club Pyramids FC in 2018.

Keno played 33 matches for the Egyptian club Pyramids FC in the 2018-19 season where he was involved in 21 goals through assists and goals.

Mohamed Saif Al Suwaidi, Chairman of Al Jazira Football Company said: “We are delighted that Keno has signed with our club and we are all looking forward to working with him.

“Keno had an amazing season with the Pyramids FC and has displayed great technical abilities and skills in his performances.  His talent will be invaluable to the squad and we are confident that he will receive full support from the management and fans.”

Suwaidi added: “I would like to express my sincere thanks to Al Jazira higher management whose support was instrumental for the deal to come through. Their ongoing support to the first team and their continued efforts to ensure the success of Al Jazira is highly valuable.

“I would also like to thank Salem Al Shamsi, Pyramids FC Club owner and the club management for their professionalism during all stages of this loan agreement.”

Jurgen Streppel, new head coach of Al Jazira FC said: “Keno will be a wonderful addition to the Al Jazira squad. He’s talented, has a good eye for goal and has good experience under his belt.

“I think he’s a player who will excite our fans, and his style is one that I believe complements the options and quality that we already have here at the Football Club.”

Keno said: “I am excited for my new journey with Al Jazira and I am delighted to join this great reputable club which was the home to some of the football world’s biggest names like the Brazilian legend Ricardo Oliveira and the African legend George Weah.

“I am fully aware of Al Jazira’s attacking play style and their commitment towards giving their fans a memorable match experience.

“Their playing style suits me and will help bring out my best performances and help the team to achieve the goals set for the new season. I look forward to working with Jurgen Streppel and his coaching staff and getting along with my new colleagues.”

Earlier, Al jazira also signed experienced midfielder Sultan Al Ghaferi on a free transfer. Ghaferi, the 32-year-old Emirati, who moves from Al Wahda club, will join his new ‘Pride of Abu Dhabi’ team-mates for the first time during this month’s summer training camp in the Netherlands for the new 2019-20 season.