Bairstow opens up on secret of success with England partner Roy 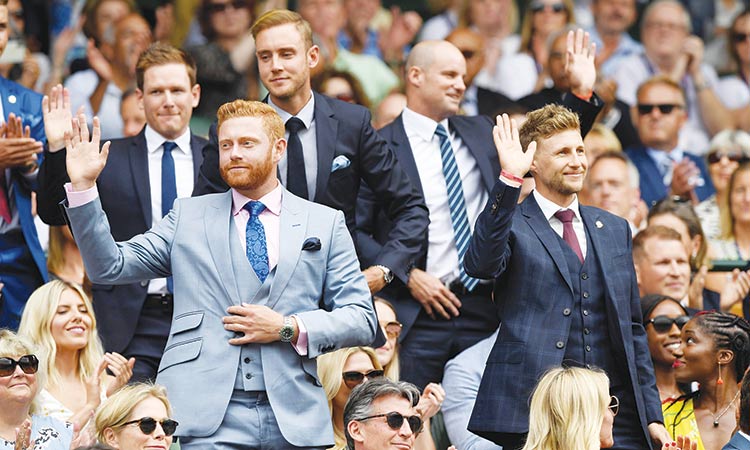 Jonny Bairstow, Joe Root, Eoin Morgan, Stuart Broad and Andrew Strauss arrive in the Royal Box on Centre Court before the third round match of the Wimbledon Championships between Ashleigh Barty and Harriet Dart. Reuters

London: England’s Jonny Bairstow has revealed that a relaxed, fun-loving approach is the secret of his World Cup success with fellow opener Jason Roy.

Bairstow and Roy have recorded three successive century stands in the tournament to lay the foundations for England’s surge into the semi-finals.

They have now reached three figures 10 times in 31 innings together, with their average opening stand sitting at 67.70 - the highest in one-day international history for partnerships with total runs of 1,000 or more.

It is no surprise that England’s successive defeats against Sri Lanka and Australia — which put their semi-final place in danger — came when Roy was absent with a torn hamstring.

Bairstow, fresh from match-winning scores of 111 and 106 in his past two innings, admitted he feels more relaxed when he sees Roy at the other end of the wicket.

“It’s just a good craic. That’s what it is. It’s genuinely good fun,” Bairstow said. “It’s pretty relaxed, good fun and the communication is important all the way through.

“We just keep each other going. It’s nice, it’s relaxed, and we just try and crack on and do what we do.”

Roy and Bairstow keep the opposition under pressure, with each trusting the other is capable of scoring runs at a rapid pace.

“Of course, you’ve got to have trust in each other, in an opening partnership. I’m sure that Andrew Strauss and Cooky (Alastair Cook) were the same when they opened in Tests,” Bairstow said.

“Along the way there’s going to be ups and downs but throughout it you’ve got to have trust within yourselves.”

While England’s international footballers have suffered semi-final setbacks in World Cups — Gareth Southgate’s side losing to Croatia last year and the women’s team beaten days ago by the United States — Bairstow takes his inspiration from elsewhere.

Ahead of next week’s semi-finals, Bairstow was asked if the footballers’ struggles had crossed his mind.

“That’s a bit of a negative way of looking at it. I’ve not even thought about it,” he said.

“Let’s remember that in 2003 an England team won a World Cup, so you can look at it in any which way you want. That Jonny became probably the best fly-half ever to play for England.”