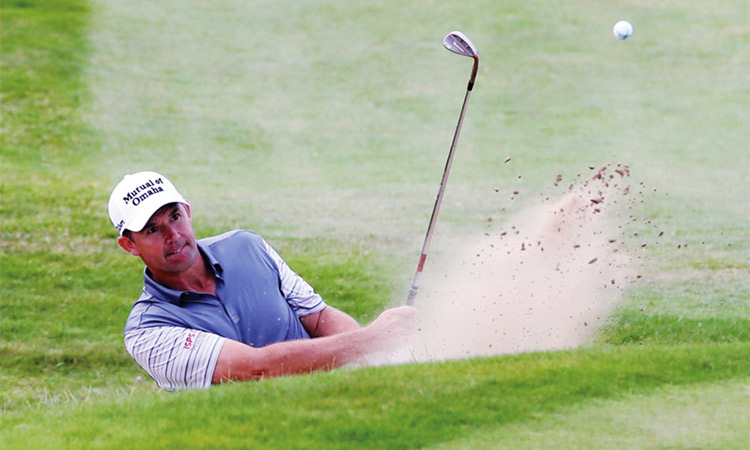 Ireland’s Padraig Harrington in action during the first round of the Irish Open at the Lahinch Golf Club in Lahinch, Ireland, on Thursday. Reuters

Local favourite Padraig Harrington gave the large crowd gathered in Lahinch plenty to cheer as he carded a blistering opening round of seven under par 63 to take a two shot lead into the second round of the Irish Open.

The Irishman hit four birdies on the front nine and added four more on the back nine, with the only blemish coming in the form of a bogey on the par 3 eleventh hole.

Harrington’s opener was his lowest first round on the European Tour for 18 years.

Harrington finished in style in front of the large home crowds, getting up and down from a bunker on the par-five 18th for birdie.

Playing partner Ian Poulter also picked up a shot on the last, his third birdie in a row, to finish four under and end the day three behind Harrington.

He’s alongside Ardglass professional Cormac Sharvin, who missed out on his European Tour card for this season by a single shot at Tour school in November. The 26-year-old carded eight pars and a birdie on his opening nine before picking up four shots and a single bogey on the back for an impressive opening 66 - the same score as Shane Lowry.

If Sharvin can keep up that form, he could secure a spot at The Open. The top three unqualified players in this week’s field will bag a spot at Royal Portrush, provided they can finish in the top 10 of Lahinch.

Sharvin is well clear of the other two Northern Irishmen in the field as both Graeme McDowell and Darren Clarke face a fight to make the cut.

Beginning their tournaments early on Thursday morning at Lahinch, Clarke carded a one over par 71 with McDowell a shot behind at two over.

McDowell could only card a single birdie, a two at the eighth, which helped alleviate the damage done by early bogeys at the second and third. A disappointing bogey six followed at the par five 12th to leave McDowell two shots outside the cut-mark of level par. Clarke, meanwhile, produced a fine finish to get in at just one over par.

Three over with five to play, the 50-year-old birdied the 15th and the 18th holes.

Meanwhile, in his first round at the 3M Open, Japan’s Hideki Matsuyama hit 10 of 14 fairways and 15 of 18 greens in regulation, finishing at 7 under for the tournament.

Matsuyama finished his round tied for 1st at 7 under with Adam Hadwin.

After a drive to the right rough on the 426-yard par-4 first hole, Matsuyama had a 90 yard approach shot, setting himself up for the birdie. This was his 3rd under-par hole in a row and moved Matsuyama to 5 under for the round.

On the par-4 second, Matsuyama’s 174 yard approach to 14 feet set himself up for the birdie on the hole. This was his 4th under-par hole in a row and moved Matsuyama to 6 under for the round.

Matsuyama got a bogey on the 502-yard par-4 ninth, getting on the green in 3 and two putting, moving Matsuyama to 7 under for the round.