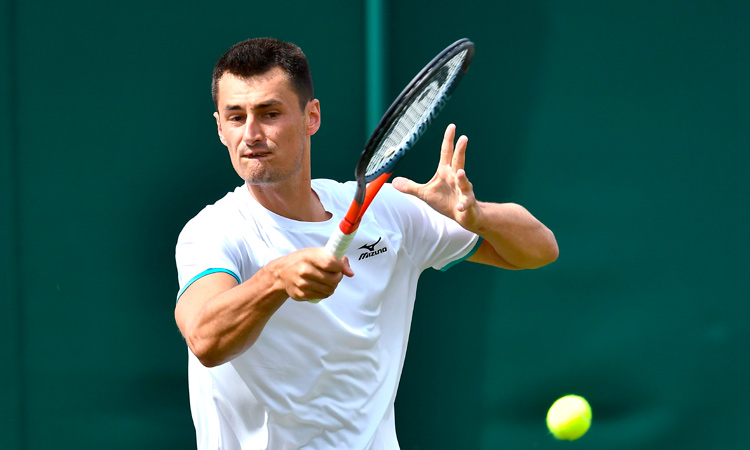 Australia's Bernard Tomic returns against France's Jo-Wilfried Tsonga during their match in Wimbledon on Tuesday. AFP

"I think I played as best as I could. It's just that I played terrible," said the world number 96, who was a top 20 player in 2011 but has been dubbed 'Tomic the tank engine' by a critical Australian media.

When he was asked if he was happy with the effort he was making on court, he snapped: "Next question please."

Tomic has had scraps with the Wimbledon authorities in the past.

Two years ago, he was fined after admitting he had faked an injury and carped about being bored in defeat to Germany's Mischa Zverev.

Tomic is not the first player to be fined for reported lack of effort in recent weeks.

America's Anna Tatishvili was stripped of her first round prize money at Roland Garros for "not playing at a professional standard".

She lost to Greece's 33rd-ranked Maria Sakkari, 6-0, 6-1 in just 55 minutes, only three minutes fewer than Tomic who had played a set more.

The longest tennis match in history was between John Isner and Nicolas Mahut in the 2010 Wimbledon Championships. The match took 11 hours and 5 minutes of play over three days.