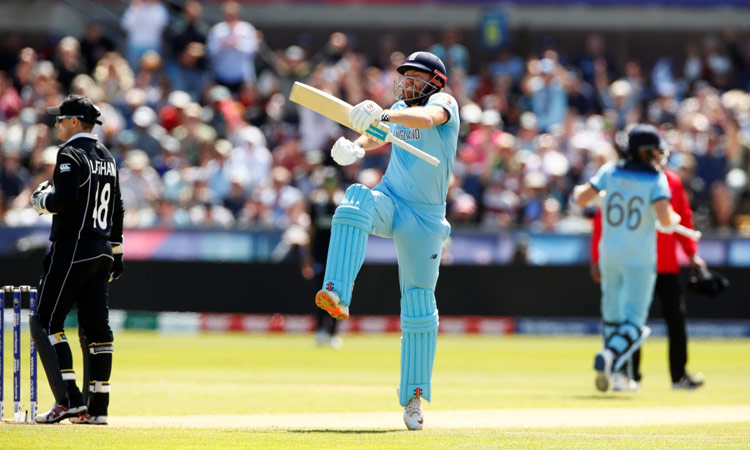 Jonny Bairstow slammed his second successive hundred to guide England to the semi-final of the World Cup, as they thrashed New Zealand by 119 runs in a crucial clash on Wednesday.

Eoin Morgan's side scored 305-8 in their 50 overs as Jonny Bairstow top-scored with 106 and Jason Roy hit 60. The tournament hosts then bowled out New Zealand for 186 to guarantee a top-four finish in the 10-team group stage.

One consolation for the Black Caps is that they should still join Australia, India and England in the last four as it will take a colossal change in net run-rate for Pakistan to overtake them even if Sarfaraz Ahmed's side beat Bangladesh at Lord's on Friday.

"I am really pleased," said man-of-the-match Bairstow. "We knew these two games were must-win to give ourselves the best opportunity of reaching the semi-final.

"We knew the performances in the last couple of games weren't up to scratch. To play the way we have and hopefully keep it going into the semis is pleasing."

As things stand, they are in line to face India, currently second, but it is still possible for Virat Kohli's men to leapfrog Australia at the top of the standings.

If England do play India it will be a repeat of Sunday's match at the Birmingham ground when, following back-to-back defeats by Sri Lanka and Australia, they inflicted a first reverse upon Kohli's side.

Black Caps skipper Williamson, who came into this match with a tournament average of 113.50, fell for 27 in unlucky fashion when fast bowler Mark Wood got his fingertips to a Taylor drive and deflected the ball onto the non-striker's stumps with Williamson out of his ground.

Taylor was far more responsible for his own exit when, deciding to go for a risky second run on 28, he failed to beat Adil Rashid's throw from fine leg to Buttler.