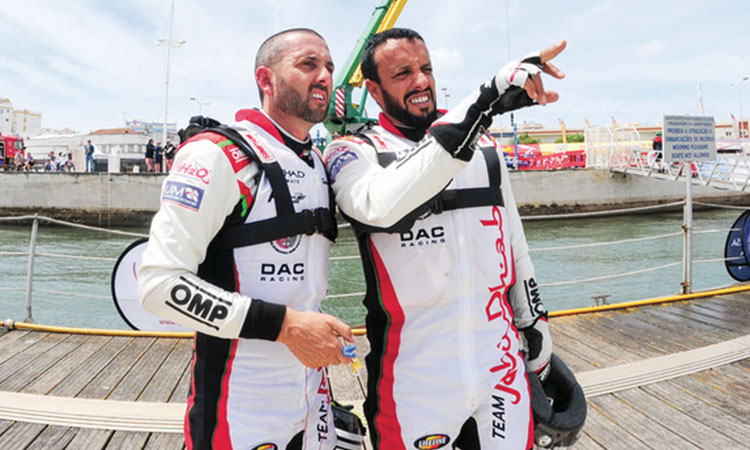 Team Abu Dhabi’s Shaun Torrente and Thani Al Qemzi will aim to press home the early advantage they hold in the drivers and teams championships following a scintillating one-two in Portugal.

Team Abu Dhabi head to Evian for this weekend’s UIM F1H2O Grand Prix of France looking to extend their unbeaten run in qualifying and races to seven and to press home the early advantage they holds in the drivers and teams championships following Shaun Torrente and Thani Al Qemzi’s scintillating one-two in Portugal in May.

While the host nation has never produced a French Grand Prix winner, Team Abu Dhabi have every reason to approach the event with confidence.

They filled the podium in France last year, with Erik Stark wining from Qemzi and eventual world F1 champion Torrente, and the duo will be aiming to extend team manager Guido Cappellini’s impressive history of Grand Prix success in France.

Cappellini won the event five times in his career, albeit when the race was run at Chalon sur Saone, and after taking charge of Team Abu Dhabi in 2015 guided Carella to successive victories in Evian over the next two years.

“We’ve made no changes since Portugal,” said the Italian ten-times former world champion. “We’re focusing on getting everything right from our point of view. We want to make sure Shaun and Thani go into the weekend in the right frame of mind to beat the opposition.”

At the other end of the scale of fortune, three-time champion Philippe Chiappe will line up at the team’s home Grand prix with some trepidation and desperate to end his run of remarkable bad luck on the Alpine lake and put an end to his Evian jinx.

The Frenchman’s remarkable run of bad luck on Europe’s largest Alpine lake has seen him fail to go the distance three times and fail to point last year.

Despite qualifying in pole in 2015 and in the top three for the last three years, the CTIC F1 Shenzhen China driver has been plagued by terminal technical issues, failing to go the distance on three occasions, finishing outside the points last year after breaking his propeller and looking for his first win since Abu Dhabi 2017, team-mate Peter Morin looking for his first win on the tour and coming off the back of a strong fourth in Portugal – both looking to become the first French driver to win on home waters.

Adding to the pressure this time round is the fact that Chiappe is yet to bank his first points of the season after dropping out of the Grand Prix of Portugal from a podium challenging position with a fuel injector issue and now desperately needs a strong finish at the teams home Grand Prix to keep any chances of a championship challenge alive.

A win or a podium for either Chiappe or his inform CTIC team-mate Morin would also lay to rest another haunting statistic, the fact that no French driver has ever won or been on the podium at a French Grand Prix, Cedric Deguisne’s fourth place in Evian in 2016 matching the best result by a Frenchman, the late Francois Salabert doing the same in Paris in 1985.

Jonas Andersson and Marit Stromoy are both in good form and coming of the back of impressive performances at the season-opener and in the last four Grand Prix it has been the Amaravati and Emirates Racing duo who have come closest to challenging Abu Dhabi, especially in qualifying.