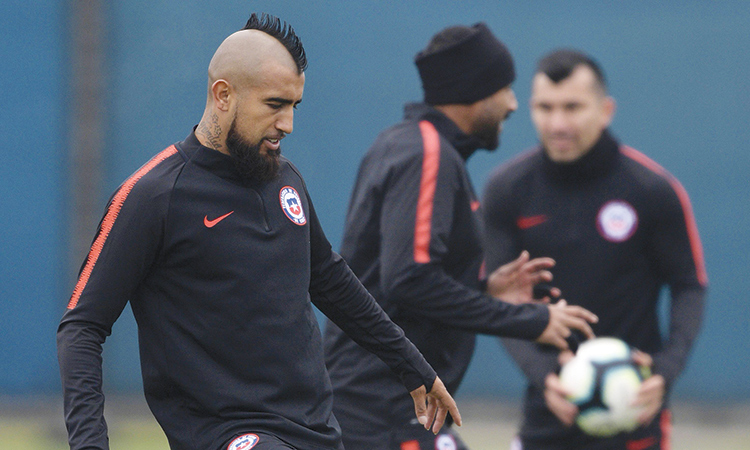 Chile midfielder Arturo Vidal says the reigning Copa America champions are focused on making history ahead of their semi-final against Peru.

The 2015 and 2016 champions are aiming for a third continental title in a row, a feat only achieved once before by Argentina in successive years from 1945-47.

“We want to leave our legacy as triple champions, that’s our dream,” said the Barcelona midfielder, an integral part of Chile’s only two previous Copa successes.

“That’s why we want to play our best match of the Copa against Peru. It would be something historic for us to get to the final and that’s our aim.”

Chile faced Peru in the 2015 semi-finals on home soil when they won 2-1 before beating Argentina on penalties in the final for their first ever continental success.

“We need to play the perfect match, to win it with authority,” added Vidal.

“Peru have great teamwork, they play well, very similar to Colombia” who Chile beat on penalties in the quarter-final.

“That’s why it will be a very difficult match and fantastic to play in it.”

Vidal pointed to Peru captain and striker Paolo Guerrero as the biggest threat Chile will face on Wednesday.

Guerrero and Chile’s Eduardo Vargas, with 12 goals each, are the top two still active scorers in Copa history. “He’s a player who knows how to play against four defenders and it always takes a lot out of us to mark him,” said Vidal.

Vargas, who scored twice in Chile’s opening 4-0 thrashing of Japan, may never have had the chance to add to his Copa ledger, but for a change of heart by Chile’s Colombian coach Reinaldo Rueda.

Vargas, known as “Turboman” for his incredible engine, fell out of favor with Rueda for disciplinary reasons following a friendly with Sweden in 2018.

He spent almost 18 months overlooked by the Colombian before being recalled for the Copa America following 17 goals in 49 matches for his Mexican club side Tigres last season.

It was a good move as Vargas has been electric in the tournament alongside a rejuvenated Alexis Sanchez — who’s looked his old self after 18 months of misery at Manchester United -- and Jose Fuenzalida in a three-pronged attack.

Peru are clear underdogs having been surprise qualifiers for the semi-finals. They arrived in the knock-out stages demoralized following a 5-0 thrashing by hosts Brazil in their final group match and progressed to the semi-finals on penalties, but only after Uruguay had three goals ruled out for offside in their quarter-final, two of those by the slimmest of margins that VAR spotted but were invisible to the naked eye.

Even so, coach Ricardo Gareca says there’s no hint of an inferiority complex amongst his players.

“We’re in the right conditions to tackle this kind of match,” he said.

“Maybe it’s a bigger match than the others before but we can play better.”

While Chile can boast established European-based talents in midfield such as Barcelona’s Vidal, Charles Aranguiz of Bayer Leverkusen and Bologna’s Erick Pulgar, Rueda feels that in Christian Cueva, who plays for Brazilians Santos, he has one of the most under-rated players in the tournament.

“As far as we’re concerned, Cuevo doesn’t get the appreciation that he deserves from his performances for the national team, I don’t know why,” said Rueda.

“Many times I see passes by a European player that illicit admiration, but I see Cuevo make passes that are just as good that go by completely unnoticed.”

This is the third time in the last four editions Peru have reached the semi-finals but they haven’t gone on to the final since 1975 when winning their second Copa title.