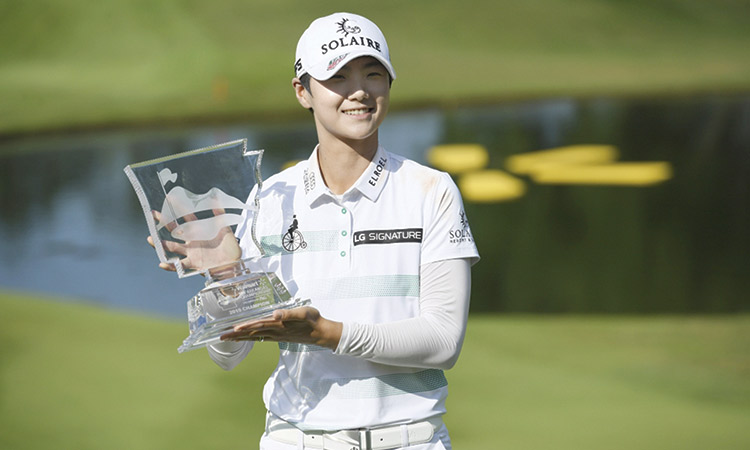 Los Angeles: Park Sung-hyun’s one-shot win at the NW Arkansas Championship at the Pinnacle Country Club in Rogers, Arkansas, on Sunday, has taken the South Korean star woman golfer to the top of the world rankings after her seventh LPGA title

Park, 25, who birdied the final hole to notch her second win of the season, takes over the top spot from compatriot Ko Jin-young.

Park with a five-under par 65, gained a share of the lead after back-to-back birdies at 13 and 14, and gave herself an eagle chance at the par-five finishing hole -- where she ended up tapping in for birdie.

South Korean stars Park In-bee and Kim Hyo-joo, along with American Danielle Kang, shared second on 17-under 196. All three carded six-under par 65s in the final round.

Elsewhere at the Detroit Golf Club in Michigan, Nate Lashley, who overcame the plane-crash deaths of his parents and girlfriend in 2004 to realise his golf-career dream, notched up his first PGA title on Sunday at the Rocket Mortgage Classic.

The 36-year-old American alternate, who was the last player to make the field, fired a two-under par 70 to complete a wire-to-wire victory at Detroit Golf Club, shooting 25-under 263 for 72 holes to defeat compatriot Doc Redman by six strokes.

Ranked 353rd in the world, Lashley claims a berth in the British Open in three weeks at Royal Portrush as well as a PGA Tour spot for the next two years.

One who had served a doping ban, South Africa’s Christiaan Bezuidenhout won the Andalucia Masters with ease on Sunday to capture his first EPGA title. Bezuidenhout, 25, finished six strokes ahead of Spain’s Adria Arnaus at Valderrama.

The South African will now play at The Open at Royal Portrush, Northern Ireland, where in 2014 at the Amateur Championship he failed a doping test that put him out of the game for nine months.