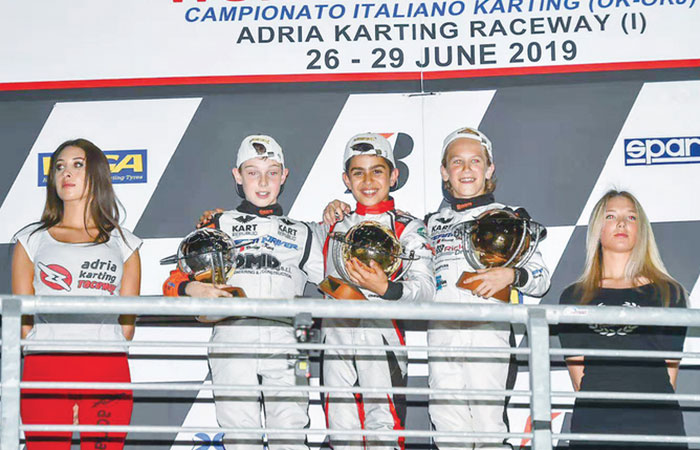 Rashid Al Dhaheri (centre) celebrates on the podium after the race.

With strong race performances throughout the whole WSK Euro Series, Rashid’s second-place podium finish in this challenging final night edition race at Adria International Raceway, saw him finish the series with a mammoth 300 points. This placed a significant gap of 65 points ahead of his nearest competitor, achieving a resounding championship victory.

This final race weekend of the series took place from 6pm until 1am, a wholly new experience for Rashid, which gave the young driver a real contest to overcome. To aid vision, the kart’s nose was mounted with a special light tailored to brightening up the front for clear vision.

This unique experience is quite a rarity in karting.

With strong consistency throughout a stellar championship series, a number of quality performances were delivered from the young talent.

Rashid achieved second in qualifying series 2, and in group E he accomplished first, third, first and first in eliminatory heats.

This strong foundation supported further success, as the racer was able to keep relaxed and finish first in qualifying heats.

The young star was now set up well for his prefinal, and he drove an intelligent race to gain second on the grid for the final.

Undeterred, Rashid kept his cool with a clear head. After his victory in the elimination races, Rashid entered into the Prefinal as the Championship leader, bringing the advantage to his side. Keeping focus and staying humble in his approach to the race, Rashid was mindful of his overall strategy to become champion.

Throughout the race, which took place during a scorching and unbearable heatwave with air temperatures going up to 46 degrees Celsius during warm-up and elimination race timings, drivers were under a lot of strain and with difficult kart set-ups. Asphalt temperatures exceeded by far 55 degrees Celsius.

As the finish line neared, cameras and journalists trained their focus to the finish line and waited in anticipation for the young star. Driving with such pressure and with an eye on a second title of this calibre was huge.

Racing as consistently as he had throughout the WSK Euro Series races, Rashid achieved a strong second-place finish to leap ahead to first position in the championship.

The young star had made the impossible possible, with a double of WSK Championships an unprecedented achievement by any person from the Arabian Peninsula or the Asian continent.

Commenting on his championship victory, Rashid said: “I’ve never taken part in a midnight race before, so I knew I faced a huge challenge to perform my best after midnight, to stay completely awake, be fully focussed and race under the floodlights.

“I applied a lot of my training, which I can thank my coach Fausto Ippoliti for, and also tried to maintain calm and focus.

“I’m so happy that I won this championship and am humbled that I achieved this with so many talented drivers on the field. To win two WSK Championships is amazing and I would like to thank the Parolin Racing Kart team, this victory is a collective victory for us all.”

The WSK Euro Series Championship by Rashid follows on from his WSK Super Master Championship victory in the Mini category earlier in the racing season.

For the WSK Master Series Rashid achieved three wins out of four rounds of racing for this competition, which was the first such achievement by any Mini driver for the past six years.