Williamson urges New Zealand to ‘move on’ after Australia defeat 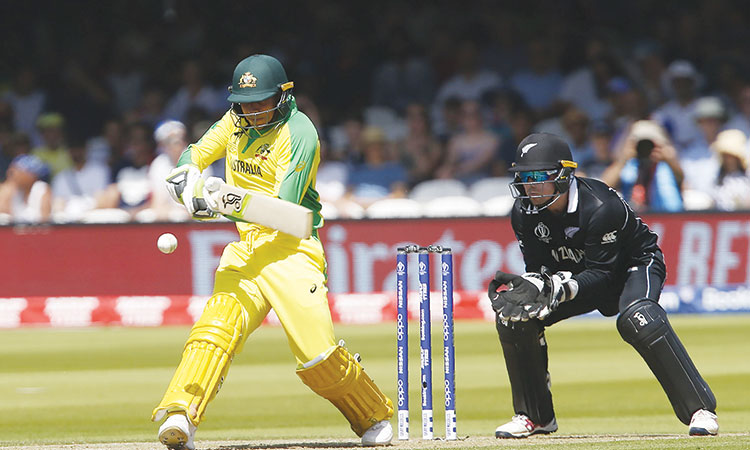 New Zealand captain Kane Williamson urged his side to move on after an 86-run defeat by champions Australia at Lord’s on Saturday condemned the Black Caps to their second straight loss of the World Cup.

Williamson’s side will guarantee their place alongside Australia — the team that beat them in the 2015 final — in the last four if they defeat tournament hosts England in their concluding group match at Chester-le-Street on July 3. And they will be into the semi-finals before then if England lose to India in Birmingham on Sunday.

“It’s about moving on and going to Durham,” said Williamson after a heavy loss just days after a six-wicket defeat by Pakistan.

New Zealand, who lost the toss on a used pitch that made conditions tough for batsmen, were right in the game when they reduced Australia to 92-5.

But a century stand between Usman Khawaja (88) and player of the match Alex Carey, whose fluent 71 included 11 fours, took Australia to 243-9. That proved more than enough, despite a last over hat-trick from New Zealand’s Trent Boult.

The Black Caps could only manage 157 in reply, with left-arm fast bowler Mitchell Starc taking a tournament best 5-26.

“We were one wicket away if you look at the positives in our bowling, it wasn’t to be today,” said Williamson.

“Rather than digging too deep, you’re analysing the past when the challenge coming up can be quite different.

“There are so many variables in this sport and World Cup. It’s about moving on to the next game,” added the star batsman, who for once at this tournament was unable to bail his side out of trouble after match-wining hundreds against both South Africa and the West Indies.

Williamson, who fell to Starc for 40 on Saturday, acknowledged that the defeats could lead to “a dent in momentum”.

“But then at the end of the day, it is coming back to the cricket that we want to play. Playing with those smarts, I think cricket smarts throughout this tournament has been perhaps the most important thing.

“On these surfaces that have varied a bit...you do need to be smart and adapt really quickly on them to give yourselves the best chance of success.”

Williamson was encouraged by the form of fast bowler Lockie Ferguson (2-49) as well as experienced left-arm spearhead Boult, saying Ferguson has “got the ability to pick up wickets at any stage of the innings.”

New Zealand also enjoyed a memorable moment in the field when Martin Guptill held a stunning catch at leg gully to dismiss Steve Smith for just five off Ferguson after flooring two easier chances “That was an epic catch, wasn’t it?,” said Williamson.

“I guess he had a couple of practises at some toughies and then he took the third one, didn’t he, which was good,” he said with a laugh.

The Black Caps are not assured of a semi-final berth with one game left against title rivals England next week.

But Vettori remains confident the 2015 World Cup runners-up will stay calm ahead of the England clash and should be capable of advancing to the knockout stages.

“I still definitely feel that this New Zealand side can make history and win it all,” Vettori said in an ICC Media column.

“Two losses at this stage will be tough to take but they have been so good for so long and have so many experienced players that I am sure they will pull through.

“It is a bit tighter now, but I still think they will feel pretty confident. Even if every result goes against them, their net run rate should still put them into the semi-finals.

“The nature of this New Zealand team for an extended period of time now has been to stay pretty constant, to not panic.” Vettori says New Zealand have been playing well enough not to lose faith in their game-plan.

“They will understand that they have played some really good cricket in this tournament,” he said.

“They will need to call on all their nous to get through against the hosts. But even if they don’t win against England and go through via net run rate, or other results going their way.

“I still think they will walk into the semi-finals thinking they can beat anyone on their day.”

Vettori’s main concern is New Zealand’s ability to score enough runs to put opponents in trouble on slow pitches, with the Black Caps yet to reach 300 in the tournament.