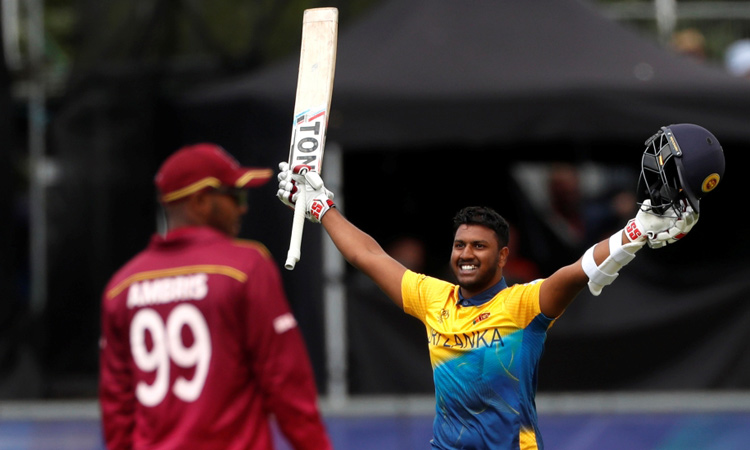 Avishka Fernando smashed his first one-day international century as Sri Lanka scored an imposing 338-6 in their World Cup clash against the West Indies on Monday, with both sides playing only for pride.

The 21-year-old right-hander scored 104 from 103 balls to guide Sri Lanka to 338-6, its highest total of the tournament, after being sent in to bat when West Indies skipper Jason Holder won the toss.

Fernando made promising starts in his two previous World Cup appearances, scoring 49 in the upset win over England and 30 in last Friday's loss to South Africa, but went on with it this time.

Sri Lanka was playing without pressure for the first time in the tournament after its playoff hopes were ended late Sunday when England beat India at Edgbaston.

Neither team can qualify for the semi-finals of the tournament after disappointing campaigns in England and Wales but that did not appear to dampen Sri Lanka's spirits as they attacked the West Indies bowlers with gusto.

Captain Dimuth Karunaratne (32) put on 93 for the first wicket with Kusal Perera to lay a solid base at Chester-le-Street in the northeast of England.

Perera was run out for 64 to leave Sri Lanka 104-2 in the 19th over but Fernando kept up the momentum, building useful partnerships with Kusal Mendis, Angelo Mathews and Lahiru Thirimanne.

The 21-year-old reached three figures off exactly 100 balls with eight fours and two sixes but was caught by Fabian Allen off the bowling of Sheldon Cottrell for 104.

Thirimanne ended unbeaten, with 45 off 33 balls.

"I played hard and I am very happy to get a hundred in my first World Cup," said Fernando.

"They had fast bowlers but the wicket was two-paced. I am very happy to do this at a young age, I got a lot of support from my team-mates."

West Indies captain Jason Holder was the pick of the bowlers, returning figures of 2-59 off his 10 overs.

But, having chosen to field, the Caribbean side failed to keep a lid on the runs and face an uphill task if they are to record only their second victory of a miserable World Cup campaign.