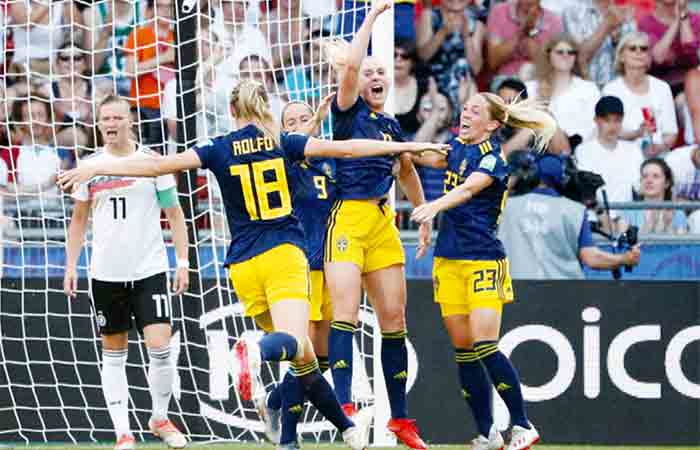 Sweden’s Stina Blackstenius celebrates after scoring a goal against Germany during their Women’s World Cup quarter-final match in Rennes on Saturday. Reuters

The Swedes had last claimed a tournament win over Germany at the 1995 World Cup but here they came from behind to triumph in an enthralling game played in ferocious heat.

Lina Magull gave Germany the lead, but the Swedes ran the German back line ragged for much of the match. Sofia Jakobsson got their equaliser before the front three of Fridolina Rolfo, Jakobsson and Blackstenius combined for the winning goal just after half-time.

“We are bitterly disappointed. We started well, but we just couldn’t deal with their long balls,” Germany goalkeeper Almuth Schult told ARD.

Once the dominant force in European women’s football, two-time world champions Germany have now failed to reach the semi-finals in two of their last three World Cups.

Defeat also robs them of the chance to defend their gold medal at the Olympic Games in Tokyo next year.

Germany won the title at the Rio Olympics three years ago, beating Sweden in the final, but still needed to finish among the top three European teams at this World Cup to book their ticket to Tokyo. Sweden will join the Netherlands and Great Britain at the Games instead.

“The defeat hurts, but we are in a process. We will grow from this experience,” coach Martina Voss-Tecklenburg told ARD, and suggested that the setback may spark a generational shift in the national team.

“I know that some players are considering (ending their international careers). We have young players coming up, and we will use the next two years before the European Championships,” said Voss-Tecklenburg.

The Germans looked the sharper side in the opening exchanges, and they took the lead on 15 minutes through Magull.

A darting run and a neat through ball from Sara Daebritz unleashed Magull in the box, and she swept in from point-blank range after a deft first touch.

Sweden took just seven minutes to respond, though, Jakobsson leaving the German centre-backs in the dust as she chased down a long ball and slotted it past goalkeeper Almuth Schult. 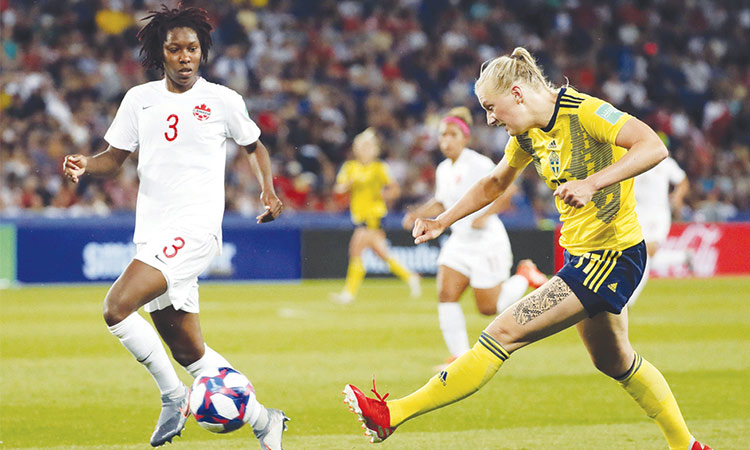