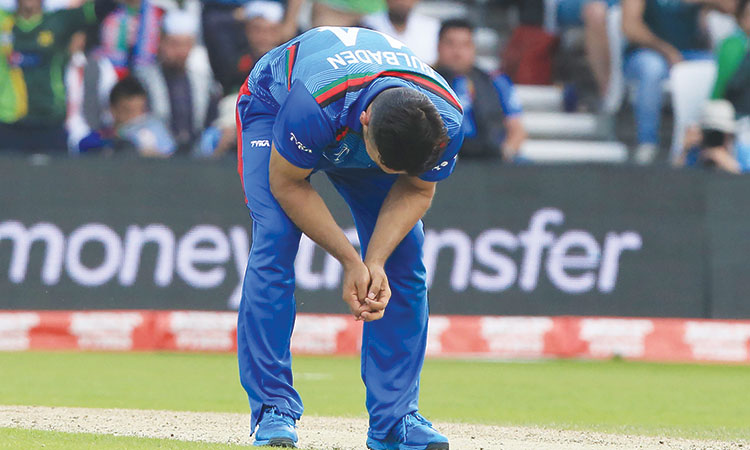 London: Afghanistan’s Hamid Hassan felt he could have stopped Pakistan from getting over the line in a thrilling World Cup match if his one-day career hadn’t come to an end with a painful injury.

Paceman Hassan, 32, could only bowl two overs before injuring his hamstring as Pakistan overcame a tense chase to beat the minnows on Saturday.

Gulbadin Naib’s side, playing in their second World Cup, are winless in the 10-team group stage with one match to play.

But Hassan, who is slated to sign off his ODI career after the World Cup, said it was disappointing to hobble off the field and see his team lose again.

“Of course I was looking forward to winning the game for the team. I was playing my last ODI and in a very good mood,” he said.

“I bowled very well in the first over and wanted to keep going but. “I feel like it’s something broken inside of my hamstring. I was very excited and pumped up.”

With Hassan out of the attack, Naib decided to bring himself on in the final stages, only to give away 18 runs to Pakistan batsman Imad Wasim.

“I felt very emotional because the team missed me a lot and the ball was also reversing. The situation would have changed,” said Hassan.

Right-arm seamer Hassan, who has claimed 59 wickets in 38 ODI matches since making his debut in 2009 for the war-torn nation, said he will continue to play Twenty20 cricket for another two years. Afghanistan end their World Cup campaign against West Indies on July 4 in Leeds.

Meanwhile, Naib defended his disastrous decision to bring himself on to bowl towards the end of a gripping match against Pakistan on Saturday -- a move that cost 18 runs in a single over.

Pakistan edged home by three wickets with two balls to spare at Headingley but the contest turned in the 46th over, bowled by Naib.

Spinners Mohammad Nabi (2-23), Mujeeb Ur Rahman (2-34) and Rashid Khan (1-50) had restricted Pakistan, who desperately needed to win to keep up their push for a semi-final place.

Pakistan, with four wickets in hand, needed 46 runs from 30 balls to win the match at the end of the 45th over but the complexion of the game was completely changed after man-of-the-match Imad Wasim smashed three fours and scrambled some more runs. Naib also bowled a wide.