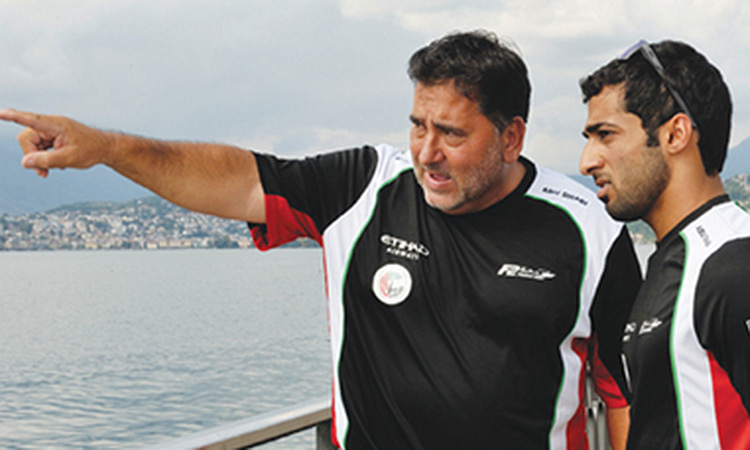 Qemzi, runner up in last year’s championship, underlined his determination to return the F2 title to Abu Dhabi International Marine Sports Club by dominating the opening day of the 2019 season in cold and windy conditions on the Kaunas Reservoir.

The Emirati driver at times looked in a class of his own, and he won the final ten-boat qualifying shoot out in spectacular style, needing just one lap to post a winning time of 45.46 secs to eclipse Norway’s Tobias Munthe-Kaas.

Team Abu Dhabi’s Rashed Al Tayer was a victim of the difficult conditions when he crashed while holding second place during an earlier qualifying group session, but he will now look to secure a Grand Prix start in tomorrow’s repechage.

There were no problems for Qemzi, who initially set the fastest time in the first free practice session before the course was shortened after Finland’s Kalle Viippo avoided injury when his boat flipped over in gusting winds.

The Emirati, whose race victory in Kaunas two years ago on his F2 debut laid the foundations for his title triumph, set a best lap time of 46.41 secs to easily top his group’s qualifying times by 1.62 secs from Latvia’s Uvis Slakteris.

Qemzi was so dominant that he was able to sit out more than half of the qualifying session, and the quality of his performance was highlighted when Germany’s Stefan Hagin was 1.6 secs slower in heading the second qualifying group.

The Abu Dhabi drivers had stopped off in Italy en-route to Lithuania for practice under the watchful eye of team manager Guido Cappellini who is asking them to emulate Shaun Torrente and Thani Al Qemzi, the reigning F1H2O world champions.

Reflecting on the day’s action, Cappellini said: “It was a perfect start for Rashid (Al Qemzi) who is in very good condition. Rashed Al Tayer had the accident in windy conditions, but he is fine and the boat is ok so he will be racing tomorrow.”

Elsewhere, in France, all eyes will be firmly fixed on Philippe Chiappe when championship rivalries resume next week at the UIM F1H2O Grand Prix of France on July 5-7, to see if the three-time world champion can finally end his Evian-Lac Leman jinx.

The Frenchman’s remarkable run of bad luck on Europe’s largest Alpine lake has seen him fail to go the distance three times and fail to point last year.

Despite the expected strong showings by the CTIC F1 Shenzhen China driver in qualifying, grabbing pole in 2015, starting from P3 the following year and P2 on his last two outings, on all but one occasion he has been thwarted by technical issues, a broken propeller his most recent heartbreak.