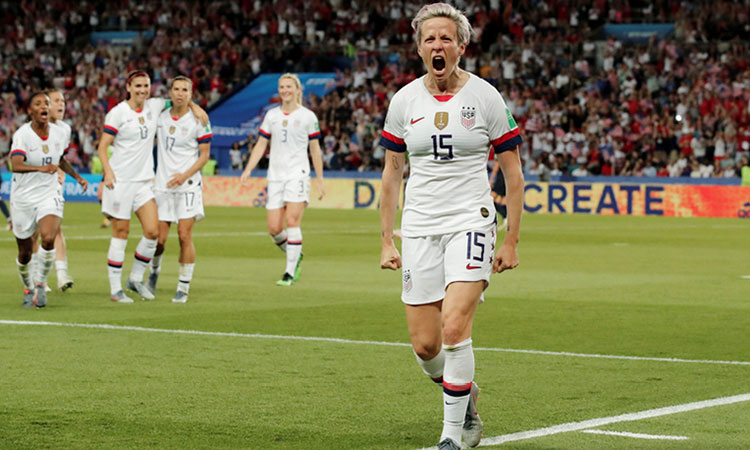 US player Megan Rapinoe (centre) celebrates after scoring her side’s second goal against France during their Women’s World Cup match in Paris on Friday. Associated Press

The Netherlands reached the semi-finals of the for the first time in their history on Saturday after beating Italy 2-0 in Valenciennes.

The Dutch entered the last four thanks to fine headers from Vivianne Miedema and Stefanie van der Graght in the final 20 minutes.

Both teams had complained about the scheduling of the match in the middle of the afternoon during a punishing early summer heatwave that is sweeping Europe.

However it was the Dutch who responded best to the on-pitch humidity, with temperatures creeping over 30 degrees Celsius, completely dominating the second half in an impressive display that will give the Germans and Swedes pause for thought.

Rapinoe’s free-kick five minutes into this quarter-final evaded a sea of bodies in the box on its way into the net to stun the home crowd at the Parc des Princes.

The US then soaked up pressure before delivering the knockout blow midway through the second half when Rapinoe turned in Tobin Heath’s centre, although Wendie Renard pulled a goal back for France to set up a tense finish.

Jill Ellis’s team held on and go through to a semi-final against England in Lyon next Tuesday as they seek to retain their crown and win a fourth World Cup in eight editions.

“We didn’t have the best night on the ball but the focus defensively, and the willingness and the discipline to do what we did tonight is tremendous,” said the 33-year-old Rapinoe.

“We were ruthless with our chances, so moving on to the next round, that’s really all that matters. It’s a game that we’ll never forget here in Paris.”

The pink-haired Rapinoe has been crucial on the field in this tournament, while dominating headlines off it thanks to her spat with US President Donald Trump over her refusal to attend any post-tournament reception at the White House.

She had already scored twice in the win over Spain in the last round and is now the joint top scorer at the tournament with five goals.