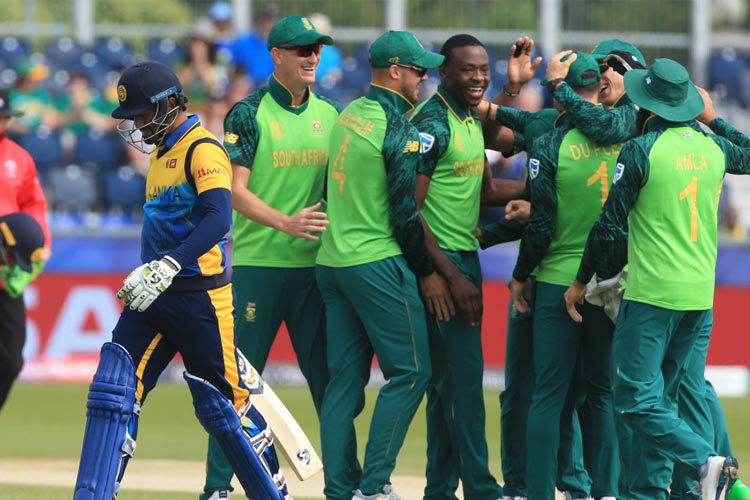 Kagiso Rabada (C) celebrates with teammates after dismissing Dimuth Karunaratne (L) for a duck off the first ball on Friday. AFP

Sri Lanka were bowled out for just 203 in their group match against South Africa on Friday and face an uphill task to secure a win that would lift them level on points with England.

Sri Lanka's victory against the tournament hosts last week revived their hopes of reaching the semi-finals after a miserable start to the competition.

But the 1996 winners, put in to bat, were all out in the 50th over in the northeast of England after losing wickets at regular intervals throughout their innings.

Recalled seamer Dwaine Pretorius was the pick of the South African bowlers, taking 3-25 in his 10 overs while Chris Morris also finished with three wickets.

"It was a tough wicket," said Pretorius. "We just had to be disciplined and luckily that plays into my game plan.

"I think everyone backed each other well and that was probably our most disciplined performance of the tournament so far.

"The wicket looks slightly slow with a big outfield. Good cricket shots, good partnerships and running hard will be key."

Sri Lanka had a disastrous start to their innings when captain Dimuth Karunaratne was caught at slip by South Africa captain Faf du Plessis off the first ball of the match, delivered by paceman Kagiso Rabada.

Kusal Perera and Avishka Fernando batted positively to take the score to 67 for one in the 10th over before Fernando (30) mistimed a shot, sending the ball steepling into the air before it was taken by Du Plessis.

Perera (30) was next to go, chopping a Pretorius delivery onto his stumps as Sri Lanka slipped to 72-3 in the 12th over.

Angelo Mathews was bowled by Morris for 11 and Kusal Mendis departed for 23.

Every recognised batsman apart from Karunaratne reached double-figures but none went on to play a big innings.

A swarm of bees briefly interrupted play towards the end of the innings, forcing the players and umpires to lie flat on the ground.

South Africa are playing for pride after a disappointing tournament in which they have won just one of seven matches so far, against Afghanistan.