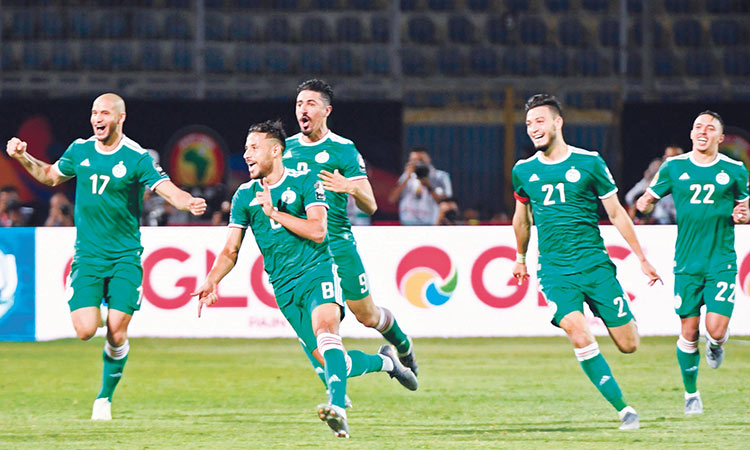 Algeria’s Youcef Belaili (second left) celebrates after scoring a goal against Senegal during their Africa Cup of Nations match in Cairo on Thursday. Agence France-Presse

Riyad Mahrez and Algeria fired a warning to the rest of their Africa Cup of Nations title rivals with a deserved 1-0 win over Sadio Mane’s heavily-fancied Senegal in Cairo on Thursday.

Mane struggled to impress on his return from suspension as Youcef Belaili crashed home the winner on 49 minutes to guarantee Algeria a berth in the last 16.

It is almost a decade since Algeria last made an impact at the competition by reaching the 2010 semi-finals, and this was a performance of great promise from the north African side in front of a large crowd at a blustery 30 June Stadium.

“We can’t say we look like a title-winning side. Beating Senegal is not an easy thing to do and there won’t be many teams capable of doing it, but that doesn’t mean things are settled,” said Algeria coach Djamel Belmadi.

“It’s just the second group game. Sure it’s against a very strong side but it’s just a group match.”

Senegal, on the hunt for a first continental title, will still be expected to join Algeria in the knockout rounds as they wrap up the group phase against Kenya on July 1.

“Of course Sadio Mane can do better,” said Senegal boss Aliou Cisse. “There was a lot of technical errors in our game. He was less prominent but I’m not concerned. It’s the whole team that needs to raise its level of play.”

Mane was one of three changes to the Senegal team that brushed Tanzania aside 2-0 in their opening game, with Cheikhou Kouyate filling in for the injured Salif Sane in central defence. Belmadi stuck with the Algeria team that rolled Kenya over by the same scoreline.

Having absorbed Senegal’s advances with relative comfort, Algeria grew more assertive and Baghdad Bounedjah had Edouard Mendy scrambling across his goal when his a deflected effort that bounced narrowly wide.

Bounedjah, who hit 39 goals in just 21 starts for Qatar’s Al Sadd last season, looked odds on to score for the second game running in Egypt when he lifted the ball over Mendy only for a retreating Kalidou Koulibaly to clear.

The Algeria forward then nodded wide from a Mahrez free-kick and forced Mendy to force behind a scuffed attempt across goal.

The half-time interval failed to arrest Algeria’s momentum as a sweeping attack saw Bounedjah lay off for Sofiane Feghouli to curl wide, but the breakthrough soon came for the Desert Foxes.

After Senegal conceded possession Feghouli pulled back from the byline down the right for Belaili to take a touch and slam the ball beyond a motionless, unsighted Mendy.

Having created a raft of chances in a commanding win over Tanzania, Senegal’s attack found a compact Algeria far less forgiving and Mahrez went close to doubling the lead with a fizzing strike from distance.

Senegalese penalty appeals were ignored when Mane was sandwiched by Ramy Bensebaini and Adlene Guedioura, while M’Bohli did well to repel a stinging shot from Youssouf Sabaly with substitute Mbaye Diagne heading the rebound wide as the Teranga Lions searched for an equaliser.

Meanwhile, Michael Olunga scored twice as Kenya edged neighbours Tanzania 3-2 in Cairo Thursday to keep alive hopes of reaching the second round in the Africa Cup of Nations.

The Japan-based forward equalised in the first half and scored the 80th-minute winner in a lively east African derby.

Johanna Omolo was the other scorer for Kenya, who trailed 2-1 at half-time.

Saimon Msuva and Mbwana Samatta netted for Tanzania, who have never won a Cup of Nations match in two appearances spanning 39 years.

Even if Kenya lose their final group match against Senegal, they will hope to squeeze into the knockout phase as one of the four best third-place teams.

Coaches Emmanuel Amunike of Tanzania and Sebastien Migne of Kenya reacted to two-goals losses in their opening group matches by making three changes each. France-born Migne spoke before the match of the need “to start well” but Tanzania were the more committed side in the early exchanges and led after only six minutes. Kenya goalkeeper Patrick Matasi could only parry a stinging shot from Taifa Stars captain Samatta and Msuva tapped in the rebound.

The Harambee Stars were unlucky not to score midway through the half when headers by Francis Kahata and Olunga struck the woodwork within seconds of each other.