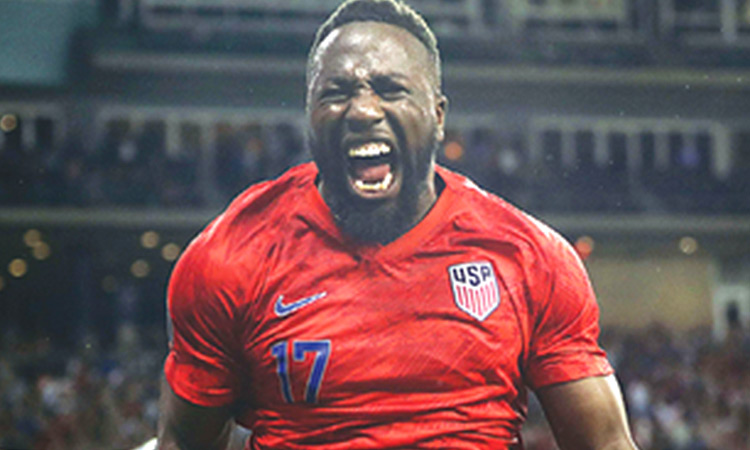 Jozy Altidore of the US celebrates after scoring a goal against Panama during their Gold Cup match. Agence France-Presse

Jozy Altidore scored with an overhead kick as the United States finished first in its CONCACAF Gold Cup group with a 1-0 win over Panama on Wednesday.

The US won all three of its Group D contests without conceding a goal and will now face Curacao in the quarter-finals on Sunday.

The Americans, who famously missed out on the 2018 FIFA World Cup after losing to Trinidad, wanted to win Wednesday to avoid playing Jamaica in the quarters. Jamaica beat the US 1-0 earlier this month when they met in a friendly in Washington, DC.

The US is almost assured of advancing to the semis as they now face the tiny Caribbean Island of Curacao, who advanced despite scoring just two goals in group play. Curacao has a population of just 160,000 compared to the US with its population of 327 million.

Panama takes on Group C winners Jamaica on the same day. The other quarter-finals feature Canada against Haiti and Mexico facing Costa Rica. Both the US and Panama had chances to score in the first half but failed to finish.

Panama goalkeeper Jose Calderon made a smart save off a left foot shot by Altidore in the 20th minute to keep it scoreless and that’s how the teams went into halftime at Childrens Mercy Park in Kansas City, Kansas.

Altidore’s dynamic goal in the 66th minute was all the Americans would need to earn the three points.

After a corner was headed back across the goalmouth, Altidore spun off a defender and beat Calderon with a perfectly-timed bicycle kick.

Altidore is coming back from a hamstring injury that forced him to take some time off.

“It has been a rough time waiting,” Altidore said. “I am just trying to get an opportunity again. To score again wearing these colours means everything to me.”