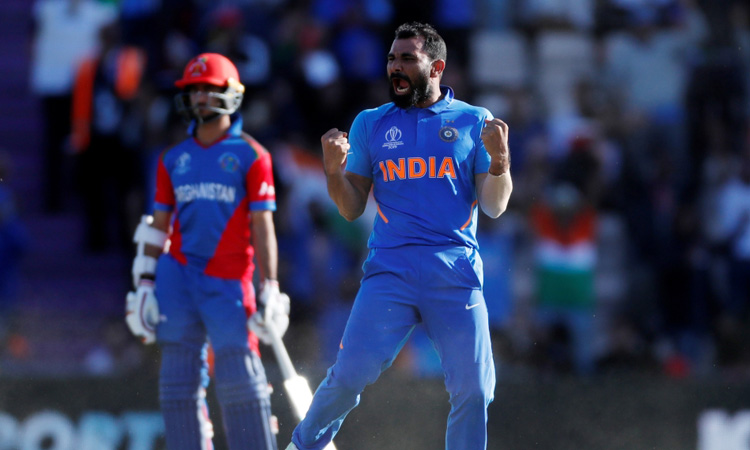 Mohammed Shami celebrates taking the wicket of Afghanistan's Mujeeb Ur Rahman to complete a hat-trick and win the match. File / Reuters

Shami claimed a hat-trick in India's narrow win over minnows Afghanistan on Saturday as the two-time champions stayed unbeaten to close in on a semi-final spot.

But the paceman's place in the starting line-up will not be certain once Kumar, who sat out the Afghanistan game with a hamstring strain and was expected to miss two or three matches, regains full fitness.

Virat Kohli's India take on struggling West Indies in Manchester on Thursday and bowling coach Bharat Arun said the make-up of the team would depend on conditions.

"Bhuvneshwar's injury is not of any great concern. It is just a niggle, which we didn't want to take a chance on," Arun said.

"And it was also an opportunity for us to plug Shami into the games. But the fact he's done exceptionally well all goes well for us. It's an embarrassment of riches.

"And we would take a call as per the conditions, but Bhuvi (Bhuvneshwar) has done exceptionally well, so I think it's a pretty good headache to have."

The 28-year-old Shami is back at the top of his game after dealing with weight issues, injury and a legal quarrel with his estranged wife over the past two years.

He returned figures of 4-40 in Southampton and ended the Afghanistan innings with a hat-trick after being given the responsibility to bowl the final over.

India are familiar with the West Indies, with many of the Caribbean team playing in the Indian Premier League.

"They (West Indies batsmen) do have their strengths. And also it's a big challenge for the bowlers too -- especially when they come after you," said Arun.

"But whenever batsmen come after you, if you're willing to look at it deeply, there is a chance in it for the bowlers, and I think that's what the bowlers would be looking to do."

India boast the game’s undoubted superstar batsman in Virat Kohli but their bowling attack could hold the key to their hopes of World Cup glory. Despite their status as the game’s global powerhouse, India have only won the showpiece tournament twice, in 1983 and 2011.

Lionel Messi scored a brilliant solo goal as Barcelona saw off Napoli on Saturday but they are likely to need something even more special from their captain to beat Bayern Munich in the quarter-finals.

Derrick Lewis capped off the UFC Vegas 6 main event with a brutal knockout thanks to some vicious ground and pound while also entering the all-time record books at the UFC APEX in Las Vegas.

Space Blues unleashed a devastating turn of foot to secure a first G1 success with an exhilarating performance in the Prix Maurice de Gheest at Deauville, France, on Sunday.