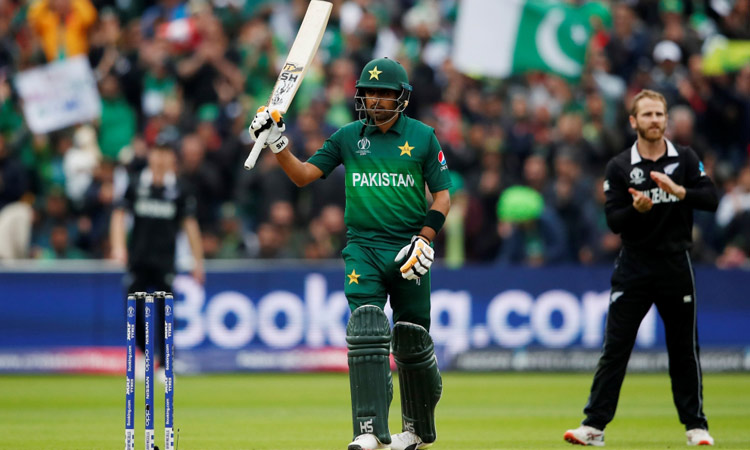 Babar Azam celebrates a half century against New Zealand on Wednesday. Reuters

The 24-year-old reached the milestone in his 68th innings during Pakistan's chase of a 238-run target.

Pakistan were 110 for three at the halfway point of 25 overs at Edgbaston, needing another 128 runs for victory.

Hafeez was caught by Lockie Ferguson in the deep off the bowling of New Zealand captain Kane Williamson for 32 to leave Pakistan 110-3.

Babar went on to reach his 50 off 65 balls with five fours.

Earlier, New Zealand reached 237-6 in their 50 overs, with Jimmy Neesham hitting a career-best 97 not out while Colin de Grandhomme made 64.

New Zealand were wobbling badly when the in-form Williamson was dismissed by leg-spinner Shadab Khan, who enticed the skipper into giving an edge to wicketkeeper Sarfaraz Ahmed when he was on 41.

New Zealand, who are second in the 10-team table with 11 points, kept the same team for the fifth match in a row.

Pakistan, who are seventh, with five points, also kept faith with the side that beat South Africa at Lord's on Sunday.