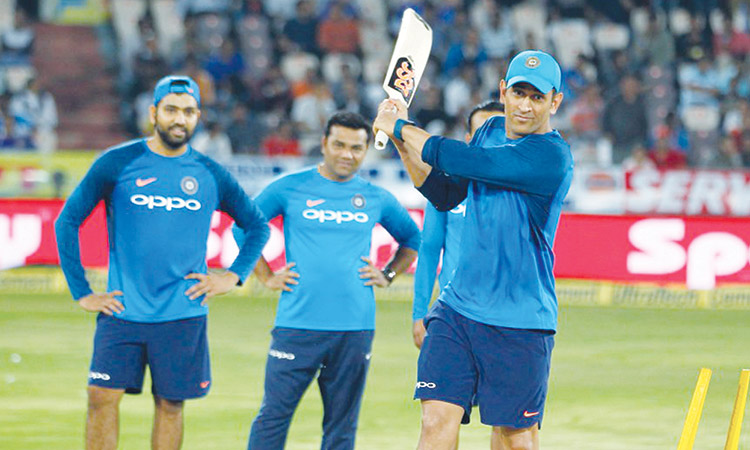 Indian players during a net session.

India will aim to continue with their unbeaten streak in the ongoing World Cup when they face a low-on-confidence West Indies team at Old Trafford on Thursday.

After coming out with commanding performances in their first three World Cup games, the Men in Blue had to toil hard against Afghanistan to earn their fourth victory of the ongoing tournament in their last game.

Against Windies, Shami is likely to retain his place in the playing XI as India are unlikely to risk playing Bhuvneshwar Kumar, who was sidelined due to a hamstring injury.

Despite Shami taking a memorable hattrick in India’s win over Afghanistan, cricket legend Sachin Tendulkar feels Virat Kohli should go with Bhuvneshwar for their next tie against the West Indies.

“For the upcoming match between India and West Indies, if I had to choose between Bhuvneshwar Kumar and Mohammed Shami, I would definitely pick Bhuvneshwar Kumar,” Tendulkar told Star Sports.

“It’s great news for India that Bhuvneshwar is fit. I have seen his body language which showed that he is really confident,” said the Master Blaster.

Bhuvneshwar had picked up an injury against Pakistan and missed the game against Afghanistan, which India won by 11 runs on June 22.

Shami was drafted in the team in place of Bhuvneshwar and the pacer returned with a hattrick in the 50th over, becoming just the second Indian, after pacer Chetan Sharma, to achieve the feat in a World Cup match, also helping the team cross the line in a tense finish.

“I know it will be a little unfortunate for Mohammed Shami but I believe for this game, Bhuvneshwar Kumar should be picked,” Tendulkar signed off.

The top-order has performed in all the four completed matches and has been the strength of the Indian team. However, the middle order looked a bit scratchy against Afghanistan and Kohli would want MS Dhoni, Kedar Jadhav and Vijay Shankar to get into the groove and perform against the attacking bowling line-up of the Windies.

With nine points from five games, India are comfortably positioned in the top four and require two wins out of the remaining four games to book their place in the semi-finals.

West Indies, on the other hand, come into the match in what is a must-win proposition for them on the back of a heart-wrenching five-run loss to New Zealand. The Jason Holder-led side has been quite inconsistent in the tournament so far. They have had moments of brilliance from individuals like Carlos Brathwaite and Sheldon Cottrell but what they have lacked is the team performance.

The Caribbean team has been unable to perform collectively as a team, a result of which is that they are currently positioned at the eighth spot with three points from six games. They have lost four of their last six games (one ended in no result) and are desperate for a win.

Another concern going into the game against India is the absence of their star hard-hitting all-rounder Andre Russell, who has been ruled out of the tournament with a hamstring injury.

They will need to come out with a complete performance if they have to beat an inform Indian team and keep themselves alive in the competition.