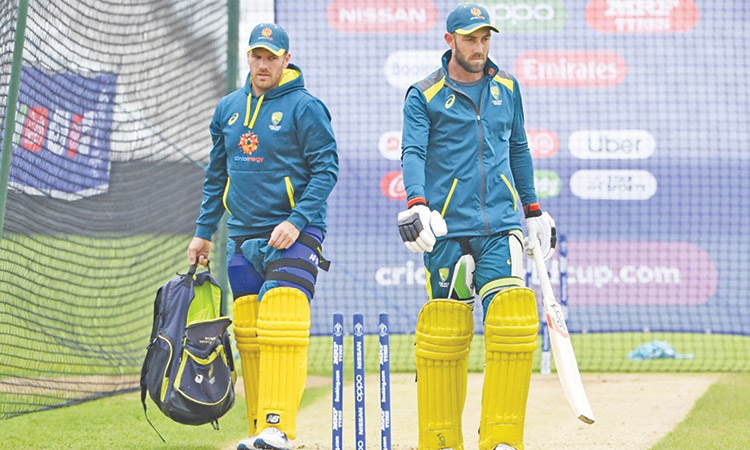 Australian players during a net session.

London: Steve Waugh says Australia are “gathering confidence and momentum at exactly the right time” after their comprehensive victory against hosts England guaranteed their place in the World Cup semi-finals.

There were plenty of doubts over the five-time winners’ chances of retaining the trophy before the competition started, but, led by prolific openers Aaron Finch and David Warner, Australia have won six of their seven group games so far.

Australia also looked dangerous with the ball against England on Tuesday, with Mitchell Starc and Jason Behrendorff taking nine wickets between them while recalled off-spinner Nathan Lyon kept the run rate down.

“Without doubt this was a commanding performance by a team that is gathering confidence and momentum at exactly the right time,” Waugh wrote in a column for the International cricket Council.

“The Australian selectors must be congratulated for the bold selection of Jason Behrendorff and the faith they showed in presenting him with the new ball,” added the former captain, who skippered Australia to the World Cup title in 1999.

“His five-wicket hall was not only significant for its impact on the match, but his ability to swing it in conjunction with Mitchell Starc will have put all future batsman on notice that their techniques will be forensically examined.”

“Coming against a quality attack on the biggest stage in world cricket, Finch’s century was his best in the green and gold,” he said.

“He is at the top of his game right now -- mentally tough, technically sound, focused and trusting in his judgement of line and length. He is leading the charge and allowing others the freedom to relax and play their own way.”

Alex Carey, who smashed 38 not out off 27 balls against England, also praised his skipper.

“I think his performances leading from the front have been amazing and then with his decisions out in the field, he’s got a group of guys who really trust him. We love working under Finchy,” said Carey.

“Performance is pretty good leadership -- and, firstly, he’s performing from the front and it’s great to see him have some real success. He’s worked really hard on his game and now he’s delivering on the biggest stage.”

Behrendorff said his five-wicket haul against England was a dream come true after years of battling back injuries that he feared could end his career. The left-arm seamer was diagnosed with a stress fracture in early 2015 and back problems have persisted since then.

He put his first-class career on hold over the Australian summer, easing back into action via the limited-over format and still has hopes of breaking into the Test team.

But for now Tuesday’s World Cup success at Lord’s, the spiritual home of cricket, has made his lengthy battles against injury worthwhile.

In just his second World Cup match, the 29-year-old bowled Australia into the semi-finals with superb figures of 5-44 from his 10 overs against England.

“Some days during all the rehab periods you think ‘am I going to get back?’” Behrendorff said after Australia dismissed England for 221 in reply to their 285-7, to win by 64 runs.

“It’s one of those things you dream of as a kid, to play cricket for Australia and to come here at Lord’s to get five wickets. Not quite sure if it’s sunk in yet to be honest, but it’s something I will treasure.

“You don’t play cricket for the accolades but to take five wickets here is something special.”