Mali hand out CAN lesson to Mauritania; Tunisia held - GulfToday

Mali hand out CAN lesson to Mauritania; Tunisia held 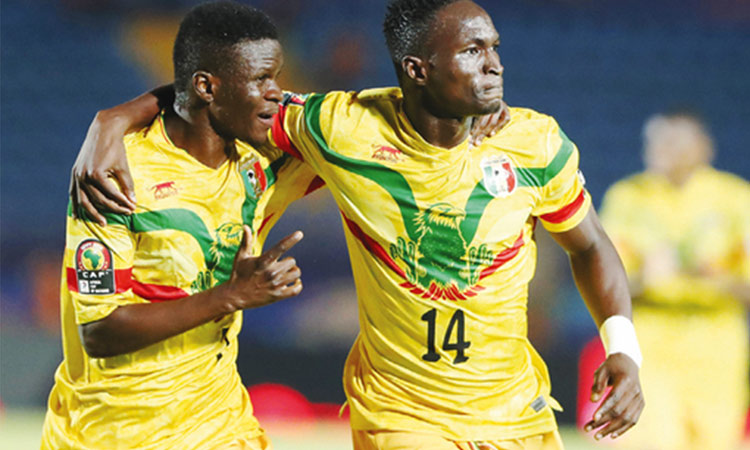 Mali’s Adama Traore celebrates after scoring a goal against Mauritania during their Africa Cup of Nations match. Reuters

Mali inflicted a harsh dose of reality on Africa Cup of Nations debutants Mauritania by routing the newcomers 4-1 on Monday in their first ever game at the tournament.

After decades being among the weakest African football nations, the largely desert northwestern country have reached the expanded 24-team competition for the first time.

Long regarded as pushovers, Mauritania have improved steadily under French coach Corentin Martins, but they were blown away by a Mali side who faced the threat of disqualification in the build-up to the event.

FIFA warned Malian football officials to get their act together regarding the holding of elections or face suspension, and they did so with less than a week to spare, although they named their squad for Egypt four days after the deadline.

Mali have often punched above their weight, finishing third in 2012 and 2013 after twice eliminating the host nations, but did not get out of their group in the last two editions.

Coach Mohamed Magassouba has emphasised youth although it was one of his elder statesmen, 28-year-old captain Abdoulay Diaby, who set Mali on their way in Suez with a 20-yard rocket into the top corner after 37 minutes.

Moussa Marega, among the leading scorers in this season’s UEFA Champions League, converted a penalty to double the lead before half-time after goalkeeper Brahim Souleymane committed a foul as he attempted to smother a shot he spilled.

Adama ‘Noss’ Traore smacked in a third with a sweet low drive 10 minutes after half-time, but Mauritania pulled a goal back when Hacen calmly dispatched a penalty after Mamadou Fofana impeded Ismael Diakite. Any hopes of a Mauritania fightback were instantly scrubbed away though when substitute Adama Traore curled a marvellous strike beyond a helpless Souleymane.

Meanwhile, Tunisia became the first 2019 Africa Cup of Nations top seeds not to win their opening match when Djalma Campos cancelled out a Youssef Msakni goal and earned Angola a 1-1 Group E draw on Monday.

Tunisia led when Msakni blasted a penalty into the net on 34 minutes only for Campos to punish a blunder by goalkeeper Farouk Ben Mustapha in the 73rd minute.