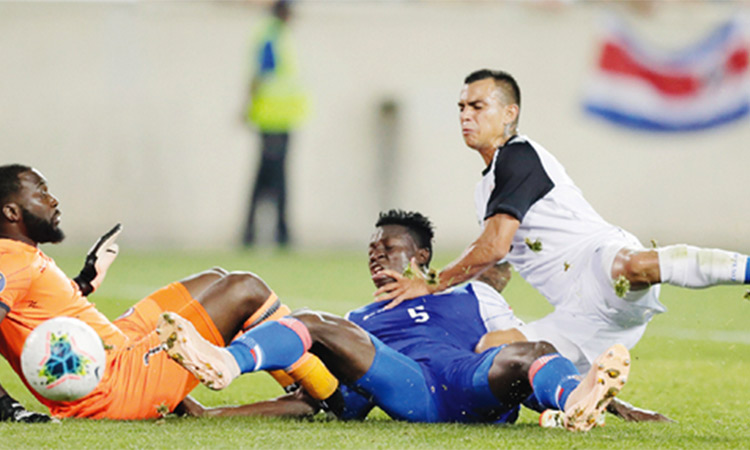 Haiti rallied with two second-half goals to beat Costa Rica 2-1 on Monday and reach the quarter-finals of the CONCACAF Gold Cup as winners of Group B.

Haiti right back Djimy Bend Alexis delivered the winner in the 81st minute with a right-footed blast that found the top right corner of the net and sent Haiti into a quarter-final clash with Group A runners-up Canada.

Costa Rica, who finished second in Group B, will take on Mexico, the Group A winners who are chasing an eighth title in the regional championship of North and Central America and the Caribbean.

Alexis played a dubious role in the game’s opening goal, a header from Costa Rica veteran Alvaro Saborio deflected off him and into the Haiti net to put the Ticos up 1-0 in the 13th minute.

Haiti equalized from the spot in the 57th minute, Duckens Nazon converting after Francisco Calvo barged over him in the box.

Earlier, Bermuda closed out its 2019 Concacaf Gold Cup Group B run with a historic 2-0 win over Nicaragua on Monday night at Red Bull Arena in Harrison, New Jersey.

It marks Bermuda’s first ever Gold Cup victory in its tournament debut.

In the 2’, Willie Clemons tried opening the scoring from a long-range, but smashed into the post. A few minutes later, Nicaragua’s Luis Copete attempted a right-footed shot, but it landed straight into the hands of Bermuda GK Dale Eve.

In the second-half, Nicaragua did not stop fighting and came within inches of scoring. In the 50’, Oscar Lopez attempted a header from the right side of the box, but it was blocked by Eve.

It took 60 minutes for Bermuda to open the scoring, as Osagi Bascome assisted with a perfect pass to Lejaun Simmons, who scored the first goal with a right-footed shot to grab the 1-0 lead.

Simmons then became a playmaker, as he assisted Nahki Wells, who doubled the lead by smacking in a header from the center of the box for the 2-0 final scoreline.