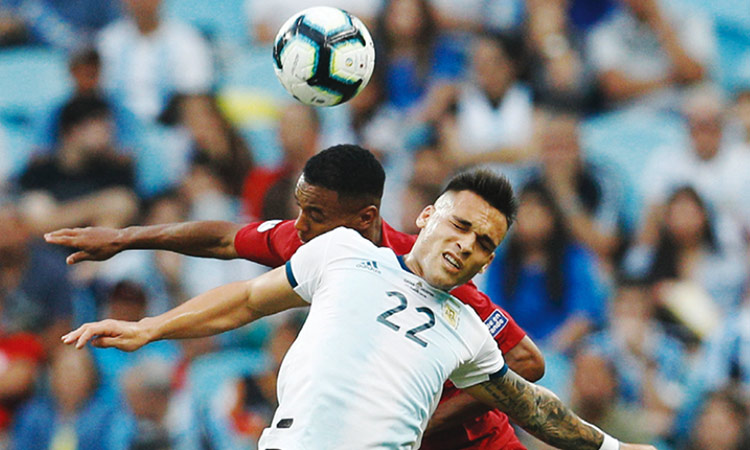 An early goal by Lautaro Martinez and Sergio Aguero’s late second gave Argentina a 2-0 win over Qatar on Sunday that qualified them for the Copa America quarter-finals.

Already-qualified Colombia beat Paraguay 1-0 in the other Group B match to secure a place in the last eight for both Peru, who finished third in Group A, and Uruguay, currently second in Group C.

Argentina, who finish second in Group B behind Colombia, will play Venezuela at Rio de Janeiro’s iconic Maracana stadium in the quarter-finals, while tournament debutants and guests Qatar are out.

Paraguay, on two points, must wait and see what happens in Monday’s Group C clash between Japan and Ecuador before finding out if they qualify as one of the two best third-place finishers.

Peru, with four points, are sure of that while only a draw between Japan and Ecuador would see Paraguay progress.

Asian champions Qatar made a calamitous start when a weak headed clearance from Tarek Salman fell to Martinez 12 yards out, but the Inter Milan forward sent his volley over the top.

He didn’t have to wait long for another chance though as Bassam Hisham played a ball across his box and straight to the feet of the Argentina forward, who scuffed a shot into the bottom corner after just four minutes.

“The goal came early and that allowed us to approach the game with greater calmness,” said Martinez.

“There was pressure, we had to win to progress and we’re happy. Now we have to work hard.” With the weight was lifted from Argentina’s shoulders, they played with a freedom expected of a side boasting talents such as Aguero and five-time Ballon d’Or winner Lionel Messi.

Qatar played with limited ambition but their talented forwards looked dangerous when they did venture into the final third.

Hasan Khalid Al Haydos got in behind the Argentina backline and tried to chip Franco Armani but the goalkeeper got a touch to divert the ball behind, although the linesman’s flag was up and it wouldn’t have counted.

“We paid for inexperience, we started two matches by conceding goals from unnecessary actions,” said Qatar’s Spanish coach Felix Sanchez, alluding to their opening tie against Paraguay when they also conceded in the fourth minute.

“We played a great team that knew they had to win, they took their first chance really well. It was our mistake.”

Messi burst into life with an acceleration towards Qatar’s area before slipping a pass to Aguero, who dragged his left-footed shot wide under pressure.

Qatar were sporadically dangerous on the break and Portuguese-born Ro-Ro stole in at the back post to meet a Karim Boudiaf cross but couldn’t direct his volley on target.

Up the other end, Nicolas Otamendi headed over from close range when it looked easier to score. Argentina almost scored a second after Qatar goalkeeper Saad Al-Sheeb spilled a header by Martinez causing a scramble in the box, but neither Aguero nor Martinez could poke the ball home. Iraq-born Hisham almost made amends for his earlier gaffe with a free-kick at the end of the half but his shot, which passed through the Argentina wall, cliped the outside of the upright.

Another direct Messi run set up Aguero but his shot was deflected over by Algeria-born Boualem Khoukhi. Aguero then drew a save from Al-Sheeb with a shot from outside the area.

Qatar made few chances but when they did, Akram Afif snatched at his effort from distance when a smarter move would have been to play in a runner from midfield.