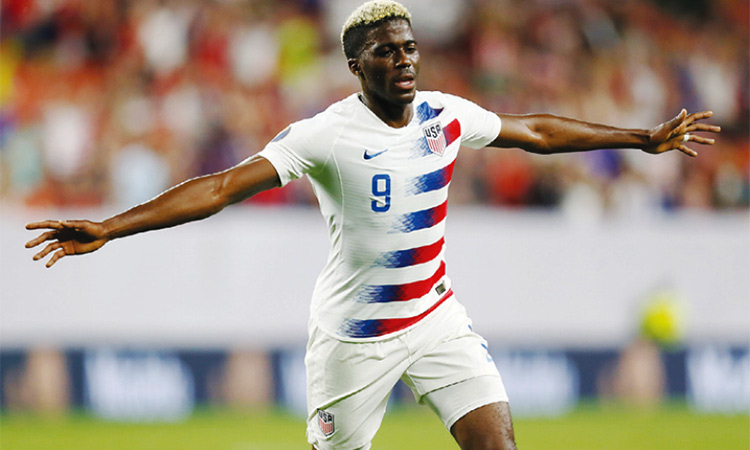 Gyasi Zardes of the US celebrates after scoring a goal against Trinidad and Tobago during their Gold Cup match on Saturday. Agence France-Presse

The US kicked their Gold Cup campaign into high gear by steamrolling Trinidad and Tobago 6-0 on Saturday, avenging a 2017 defeat that sent the Americans crashing out of the 2018 World Cup qualifiers.

The US was not only seeking to advance to the next round of the Concacaf Gold Cup, but redemption for that 2-1 loss in their last meeting which sent shockwaves around the soccer world.

The 2017 Gold Cup champion US opened their 2019 campaign with a 4-0 win over Guyana. They stepped up their attack against Trinidad on Saturday night, scoring five goals in the final 24 minutes of the contest at FirstEnergy Stadium in Cleveland, Ohio. Gyasi Zardes and Aaron Long each scored twice and Zach Steffen stopped three shots for the shutout for the Americans, who had just three players in their lineup who played in that stunning upset two years ago.

One of those was Christian Pulisic who scored in the 73rd minute. The other two were Paul Arriola and Michael Bradley. Arriola also scored against Trinidad.

Berhalter started the same lineup Saturday that he used in the win over Guyana.

But this rout should allow him to mix things up in their next game on Wednesday against Panama which will determine first and second place in their group.

Zardes narrowly missed a hat-trick, getting three straight chances from in close on the 70th minute. He hit the post on the first, was stopped by the goalkeeper on the second and when the ball came back to him, he sent it sailing high over the bar.

After a first quarter-hour that saw plenty of end-to-end action, Panama broke the deadlock in the 16th minute, Abdiel Arroyo receiving a long pass from Michael Murillo and cutting past Guyana GK Akel Clarke before slotting home.

Sixteen minutes later came a moment of Gold Cup history, as a penalty kick was awarded to Guyana. Neil Danns stepped up to take and sent Panama GK Luis Mejia the wrong way, finishing down to the left with authority for the first ever major tournament goal for Guyana.

The jubilation was short-lived. In the 40th minute, Guyana DF Terence Vancooten got wrong-footed on a cross and turned the ball into his own net to give Panama a 2-1 lead.

Shortly after the restart, Panama were awarded a penalty, with Eric Davis putting the second attempt home for a 3-1 lead.