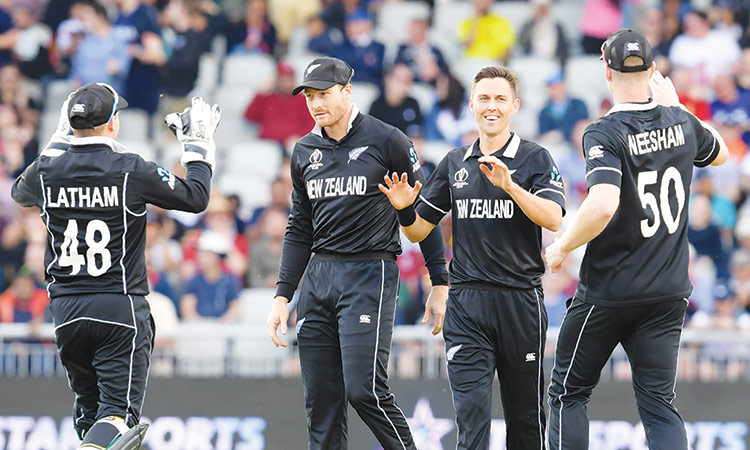 Manchester: Trent Boult said he hoped proud fans back at home would enjoy “diving into their poached eggs” after holding the decisive catch that saw New Zealand beat the West Indies by just five runs in a World Cup thriller.

New Zealand lost both their openers for ducks to be 7-2 before Kane Williamson’s career-best 148 -- the captain’s successive hundred of the tournament after a match-winning century against South Africa -- took them to 291-8.

Williamson received good support from Ross Taylor (69) in a third-wicket partnership of 160.

“I thought it was classy, to be honest,” said Boult.

“It’s what they’ve done time and time again, just absorbed the pressure there.”

Saturday’s day/night match at Old Trafford looked certain to go New Zealand’s way when the West Indies slumped to 164-7, chasing a target of 292.

And the Caribbean side still needed a further 47 runs when they lost their ninth wicket.

Yet the West Indies got to within one hit of victory thanks to Carlos Brathwaite’s remarkable 101 -- his maiden one-day international century coming after just a lone fifty in the all-rounder’s previous 37 matches at this level.

But with six needed to win, Brathwaite launched the last ball of the penultimate over from Jimmy Neesham high into the Manchester sky only for Boult, just inside the boundary rope, to take a well-judged catch at long-on.

The win saw New Zealand, the 2015 losing finalists, return to the top of the 10-team table. It also moved them to the verge of semi-final qualification as they remained unbeaten at this year’s tournament after thrilling wins over both Sri Lanka and South Africa.

“It’s what it’s all about. It’s awesome to be a part of it. And I’m sure there will be a lot of proud Kiwis back home, diving into poached eggs, watching a result like that,” he added.

“I’m sure that will give us a little bit of confidence moving hopefully deeper into the tournament.”

Asked what his thoughts were as he got underneath Brathwaite’s final hit, Boult replied: “Yeah, pressure situation, I guess.

“Initially I thought it was going to be quite a way inside the rope. It was almost driven for six in the end, but nice to snaffle it. And what a game. Simple as that, really.”

Boult took a couple of early wickets but also dropped a difficult chance offered by Chris Gayle, who was missed twice more.

It looked as if the veteran opener might make New Zealand pay dearly, with a typically quick 87 before Boult caught him in the deep.

“The way Chris batted -- he’s done it many times,” said Boult. “But for Carlos to come out and do that as cleanly as he did, pure hitting -- I’m going to say that was pretty cool to watch.

“It was a good crowd out there, so it was good for them.

“It was pretty exceptional, a great hundred. But to be on the right side of it is, of course, a very good feeling.”